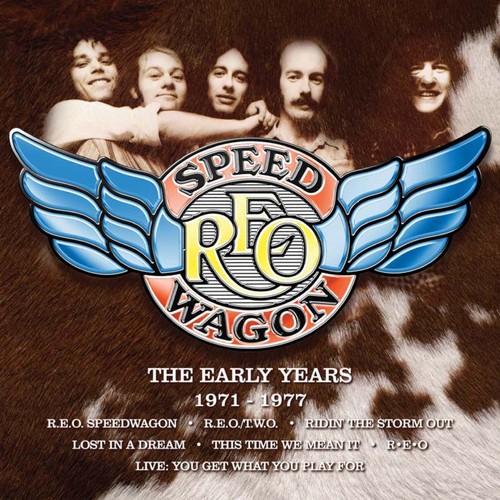 UK eight CD set. Although best known for the AOR and radio hits from the early 1980s, REO Speedwagon's long history goes way back to their formation in Champaign, Illinois in 1967. By the time they came to record their debut LP for Epic Records in 1971, the line-up had settled around Terry Luttrell on lead vocals, driving force Gary Richrath on guitar and Gregg Philbin on bass, joining Neal Doughty and Alan Gratzer. Although guitarist Gary Richrath has long been an important and influential figure in the songwriting and musical direction of the band, by the release of second LP, REO/TWO, the band were joined by Kevin Cronin on lead vocals. His tenure with REO was cut short when he was replaced on lead vocals by Mike Murphy for 1973's Ridin' The Storm Out, 1974's Lost In A Dream and 1975's This Time We Mean It, the latter co-produced by future Eagles producer, Bill Szymczyk. By 1976's REO, Kevin Cronin had returned to the fold, making a significant contribution to the songwriting alongside Gary Richrath. Produced by John Stronach, REO would also be the last studio LP to feature Gregg Philbin on bass, who'd be replaced by Bruce Hall following 1977's double concert album Live (You Get What You Play For). As well as extensive liner notes from Malcolm Dome, this expansive set features a wealth of bonus tracks.