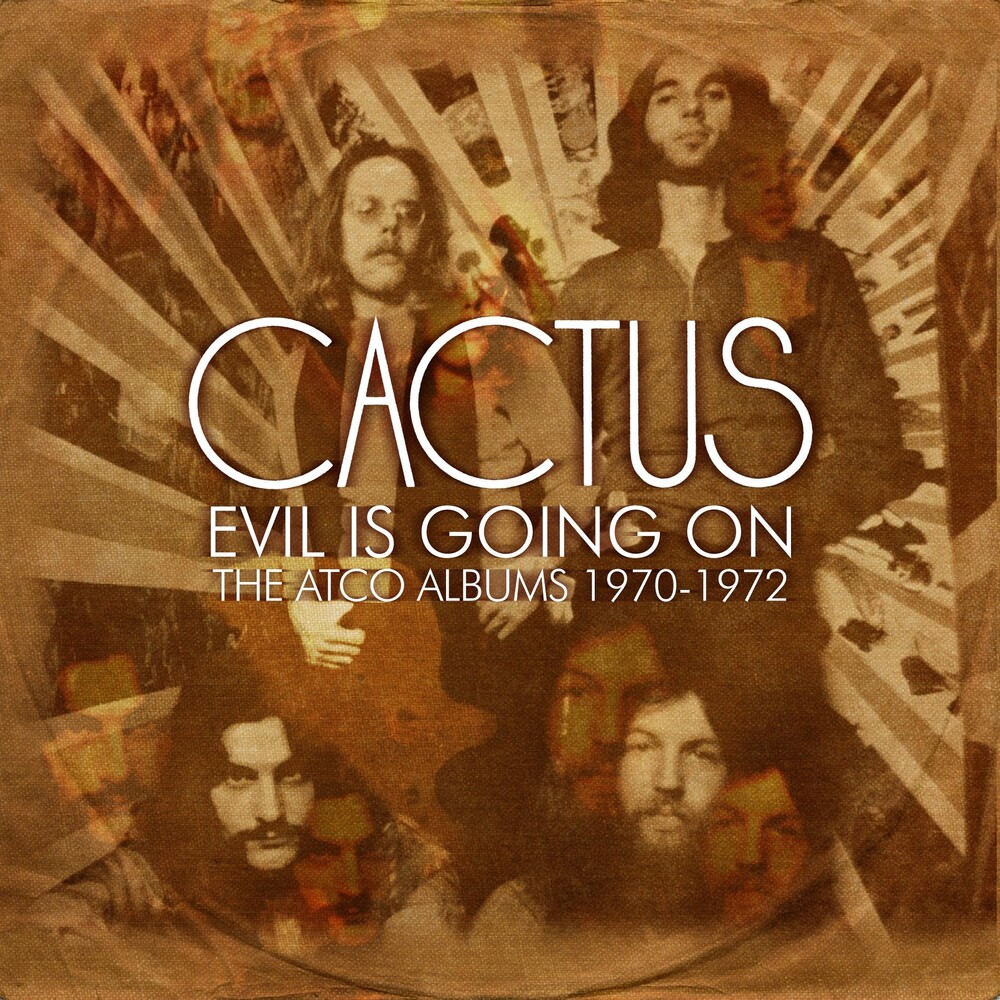 Four studio albums from the legendary Cactus recorded from 1970 to 1972. Plus a host of bonus tracks. A real treat for fans of blues rock, proto-stoner rock and proto-metal. Featuring their bluesy, gritty rock which became a big influence on future generations of hard rock and heavy metal bands, including Montrose, AC/DC and Van Halen. With four CDs of live recordings from the period recorded at the Ellis Auditorium in Memphis, at the 1970 Isle Of Wight Festival, the 1972 Mar y Sol Pop Festival in Puerto Rico and at the more intimate settings of Gilligan's Club in Buffalo, New York. The latter recorded by legendary producer Eddie Kramer (Jimi Hendrix, Led Zeppelin) with The Electric Ladyland Mobile Unit. Formed in 1969 by former members of Vanilla Fudge, Tim Bogert on bass and Carmine Appice on drums, Cactus released their self-titled debut on the Atco label in 1970. Although originally slated to feature Rod Stewart and Jeff Beck, the line-up would be cemented by Jim McCarty (from Mitch Ryder's Detroit Wheels and The Buddy Miles Express) on guitar and Rusty Day (from Ted Nugent's original band, The Amboy Dukes) on vocals and harmonica. This line-up would record the band's first three LPs, 'Cactus', 'One Way... Or Another' and 'Restrictions'. Included among the originals 'My Lady From South Of Detroit', 'No Need To Worry' and 'Feel So Good' on their first album are covers of Mose Allison's blues standard 'Parchman Farm' (a major inspiration for the song 'Hot For Teacher', and the intro to 'Let Me Swim' prefiguring Eddie Van Halen's 'Eruption'), plus Willie Dixon's 'You Can't Judge A Book By The Cover'. 'One Way... Or Another' (1971) was recorded at Jimi Hendrix's Electric Lady Studios in New York, and as well as 'Rock 'N' Roll Children' and live favourite, 'Big Mama Boogie, PT 1 & 2', the album also includes two classic covers; Little Richard's 'Long Tall Sally' and Chuck Willis' 'I Feel So Bad'. As well as 'Token Chokin' and 'Mean Night In Cleveland', 'Restrictions' - the third and last LP to feature McCarty and Day features their cover of Howlin' Wolf's 'Evil (Is Going On)', the inspiration for Monster Magnet's cover of the same song some 20 years later. Cactus were joined for 1972's 'Ot 'N' Sweaty by Atomic Rooster and Leaf Hound's Pete French on vocals, Werner Fritzschings on guitar and Duane Hitchings on keyboards, the first side of the original LP recorded live in April 1972, the second side featuring studio recordings which end with a somewhat incongruous cover of 'Underneath The Arches', apparently inspired by touring with Rod Stewart and The Faces.