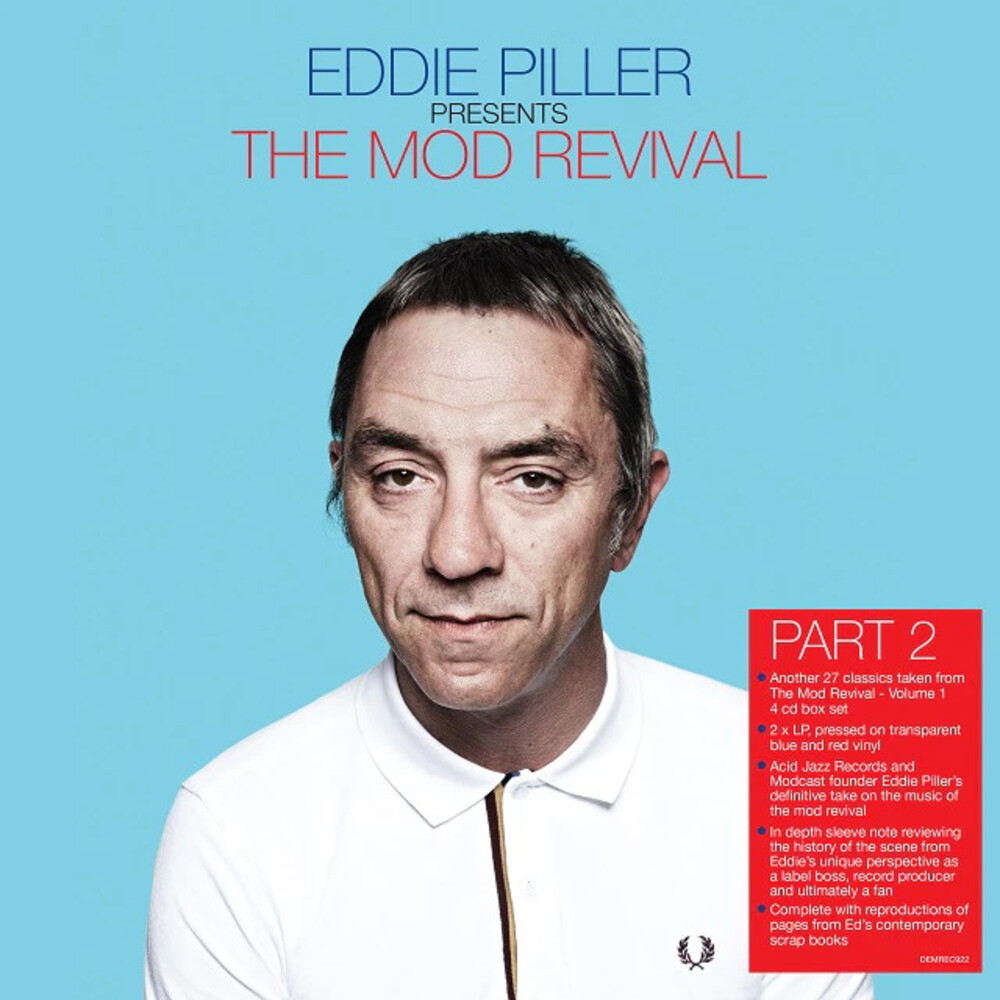 In 1979 as a 15-year-old Eddie Piller was perfectly placed to be at the epicentre of the Mod revival. An inquisitive passion for music, a family connection to Mod royalty The Small Faces, and an attitude that saw him travelling his home city, then the country and then the world to take in the sounds that were emerging. In the years since, Piller has been a legendary figure within the music industry setting up and continuing to own the ground-breaking Acid Jazz label, signing multi-platinum artists such as Jamiroquai and The Brand New Heavies collaborating on compilations with Martin Freeman and as an award winning broadcaster even setting up his own Totally Wired Radio station. In The Mod Revival he looks back at the movement that set him on his way. Mod is a sixties youth movement original built on sharp clothes, American soul music and nights on the town, that has never really died. The originals added young British groups to their likes and then moved on, but their influence echoed on through the 1970s in Northern Soul clubs, and in the sixties influenced bands of the pub rock era. When punk arrived, it was supposed to sweep away the past, but instead the Sex Pistols were covering the Small Faces. The Clash brought in Mod DJ Guy Stevens to produce London's Calling, The Buzzcocks sounded closer to the Hollies than The Ramones and in The Jam's Paul Weller there was a musical and sartorial nod to the past of The Who, The Beatles and pop art arrows. Weller had spent the 1970s becoming obsessed by mod and saw punk as having a similar youthful energy to the era he had missed by being born a decade too late. For others Weller's style proved an inspiration, and as the Jam broke through in late 1978, they saw a wave of bands follow in their wake, and they themselves influenced others to form their own groups. But there were other things. In bleak late 70s Britain the glorious optimism of the 1960s looked bright and shiny, and as it was only a decade or so in the past, it was easy to pick up original records, clothes and books for pennies, and as you bought these you met other like-minded souls who did the same. For those a little too young for punk, it was a community of gigs, scooters, clothes, bands and records, and for many it developed on through. Eddie never stopped being a mod and has a unique perspective having now lived through four decades of being intimately involved in the music that has emerged from the mod scene. In this part two double vinyl edition (Part 1 and it's CD equivalent reached #14 in the UK compilations charts) Ed guides us through some of his favourite music from the scene. He guides us through a plethora of bands whose influences include The Who, The Kinks and the Jam, to sixties soul and R&B, those with an eye on psychedelia. The records have a vitality and a certain stylish swagger to them, that marks them out as mod. In the deluxe booklet, Piller has written a 5000 word note describing what it meant to him and has granted access to his own scrapbooks from his many years of gig-going from which pages and memorabilia are reproduced. Eddie Piller's Mod Revival is a personal appraisal from the founder of The Modcast, on what the mod explosion of the late 70s and 80s means to him.