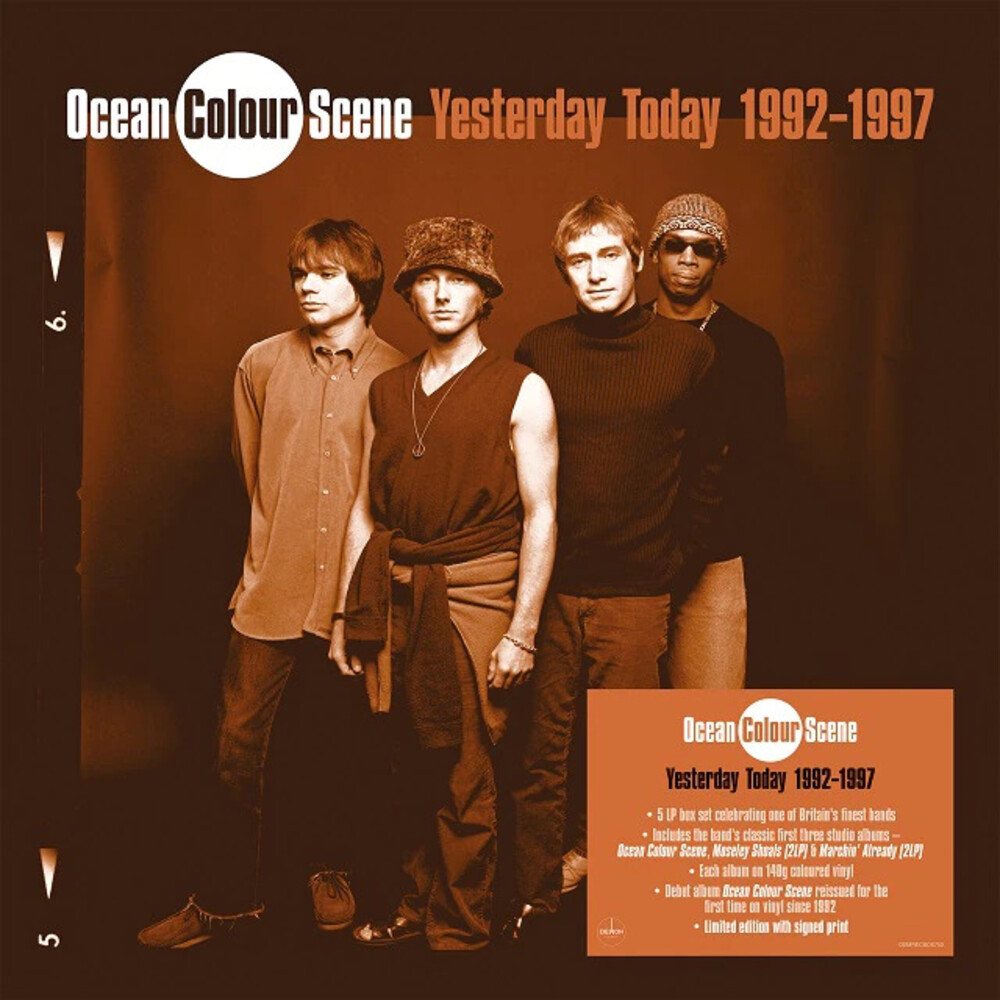 Limited edition with signed print! All beginnings start with a name. And so, in October 1989, Simon Fowler, Steve Cradock, Damon Minchella and Oscar Harrison sat down together, chose their three favourite words, arranged them in a satisfactory order and became Ocean Colour Scene. A year later, they recorded their debut single 'One Of Those Days' and within months had a first taste of chart action with a third single 'Yesterday Today'. Nevertheless, mainstream success would prove to be a trickier proposition. After a clutch of underperforming single releases, their record label, Fontana, dropped the band. There followed a three year hiatus and a difficult period of self-examination. When the band re emerged, they had reinvented themselves and faced the music industry guns blazing. In February 1996, 'The Riverboat Song' smashed into the UK chart and trail blazed six consecutive top ten hits. Backed by the triple platinum selling Moseley Shoals and the number one album Marchin' Already, Ocean Colour Scene became one of the hottest bands in the country, as the hits kept rolling. Thirty-five years on, and Ocean Colour Scene are still together: making music and regularly selling out huge concert halls across the country. They have the support of an extraordinarily dedicated and loyal fan base who cherish their music and hold close to their hearts a lifetime of memories supporting the group. Yet Ocean Colour Scene have never been popular with the music press. They are frequently overlooked for the key role they played in the nineties music scene. They were, and still are, subjected to derision and scorn. It matters not. Ocean Colour Scene did it their way. Standing firm by their music. They became the people's band. They believe in the soul of bass, drum and guitar rhythm. They exude melody. And they stand amongst the finest purveyors of the stirring sounds of a live concert. Each of the band has a passion to transcend everyday mundanity with music. And most of all they believe, as they always have, that one song can elevate the spirit and enrich the human experience. A celebration of one of Britain's finest bands. This 5LP collection brings together the band's classic first three studio albums; Ocean Colour Scene, Moseley Shoals and Marchin' Already. Including some of their biggest hits; The Day We Caught The Train, The Riverboat Song, Hundred Mile High City, The Circle and Travellers Tune. The bands debut self-titled album appearing here for the first time since it's original pressing in 1992. All vinyl is limited edition coloured vinyl.