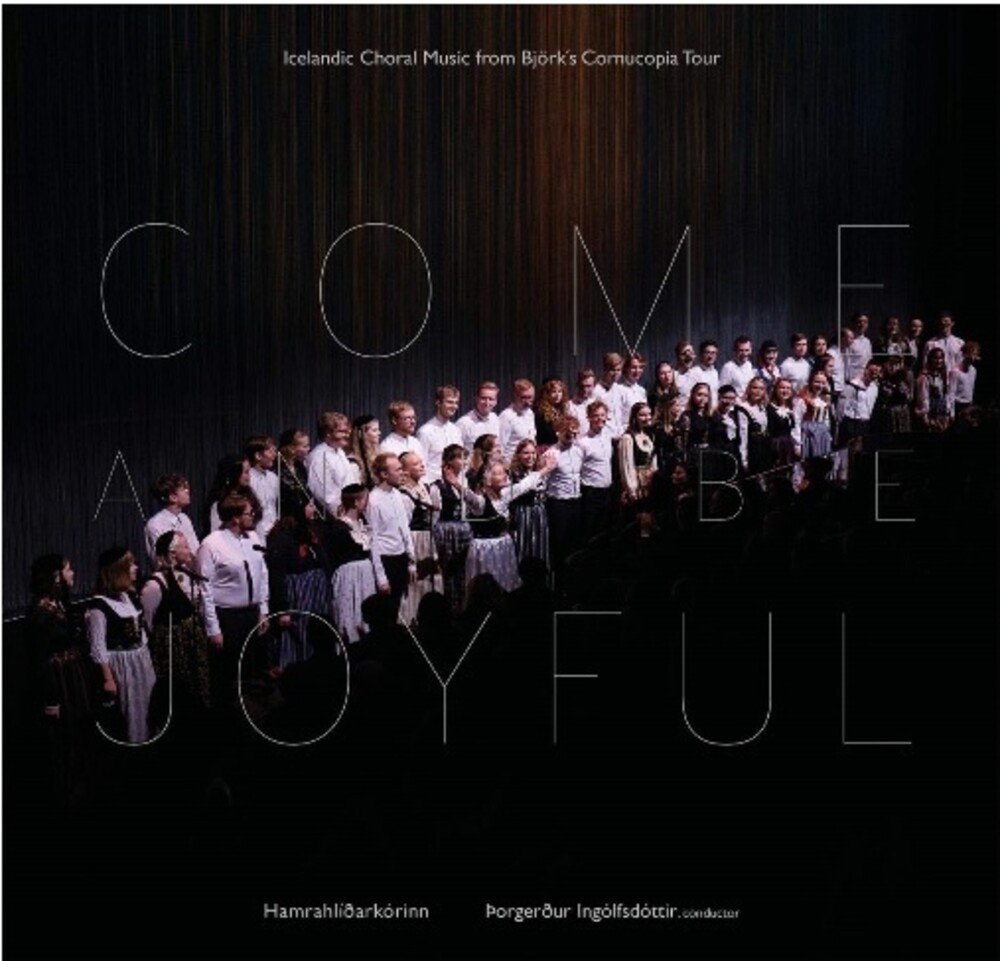 Conducted by _orgerdur Ingólfsdóttir and conceived during their collaboration with Björk on Utopia, `Come and be Joyful' is built out from the choir's phenomenal support set at the Cornucopia live shows, with additional tracks added following the end of the tour.

Björk herself was a member of the choir as a teenager, and as a result, has been a long-time collaborator. As such a fan of the choir's work and completely unique sound, Björk featured them on both the Utopia album and had all 52 choristers accompany her around the world to perform at every live show during the Cornucopia tour.

`Come and be Joyful' features Icelandic folk songs along with two collaborative Björk covers - `Cosmogony' & `Sonnets', based on Björk's own arrangements.

The Hamrahlíd Choir has been at the forefront of Icelandic musical life for more than four decades. Its members are former students at Hamrahlíd College in Reykjavík, where _orgerdur Ingólfsdóttir formed a choir in 1967 and was its conductor until 2017. This was among the first college choirs in Iceland and has maintained its leading position. In 1982, _orgerdur formed the Hamrahlíd Choir, an ensemble made up of graduates of the college choir, and she has been its conductor ever since. More than 2,500 Icelandic teenagers have come into contact with classical music through the Hamrahlíd choral experience. Many of these have had no prior musical training, but through diligent practise they have gone on to participate in music-making of the highest quality, from new Icelandic compositions to the choral masterworks of Bach, Beethoven, and Mozart.

Having been a breeding ground for many of Iceland's leading singers, instrumentalists, and composers, former members of the choir include singer/songwriter Björk Gudmundsdóttir, pianist Víkingur Olafsson, composer Haukur Tómasson (recipient of the Nordic Council Music Prize 2004), musicologist Arni Heimir Ingólfsson, and bass Kristinn Sigmundsson (a frequent guest at the Metropolitan Opera stage). Björk began her collaboration with The Hamrahlíd Choir in 2017, singing on her album Utopia, and this collaboration continued with the Cornucopia concerts at The Shed, New York City, in May and June 2019 and the Cornucopia tour of Europe In November and December 2019.

Conductor _orgerdur Ingólfsdóttir studied music in Iceland, the United States, Austria, and England. She has received many prizes and awards, including the Prize of Optimism from Broste in Copenhagen in 1983 and an award from Leonie Sonnings Music Fund in 1975. She was awarded the Order of the Knight of the Falcon by the President of Iceland in 1985 for her pioneering musical work in Iceland. In 1992 the Icelandic Performing Rights Society (STEF) granted her special recognition for the performance of Icelandic choral music. In 1992 the King of Norway appointed her a Commander of the Royal Order of Merit. In 2000 she was the director of the Voices of Europe, a multi-national youth choir made up of singers from each of that year's nine European Cities of Culture. The choir performed throughout Europe to outstanding reviews. In 2008 _orgerdur was made an honorary member of the Society of Icelandic Musicians and in 2012 she was appointed Reykjavík City's Honorary Artist. In 2013 she received the Honorary Award of the Icelandic Music Awards, and in 2016 she was presented with a Special Recognition Award from the University of Iceland's School of Education, for her outstanding achievement as a teacher. In 2018 she was awarded honorary citizenship of the city of Reykjavík.

A word from Björk:

"i am so incredibly grateful that the hamrahlíd choir and it's original conductor _orgerdur ingólfsdóttir came on tour with me . i was myself in this choir when i was 16 and i think every single icelandic musician you have ever heard of was brought up and musically baptised by this miraculous woman . she is a legend in iceland and has guarded optimism and the light in the tumultuous times that teenagedom is . she has also encouraged and commissioned dozens of choral works from all of iceland's most prominent composers for half a century or so . i am absolutely beyond honoured , warmthness?, love and respect , björk??"