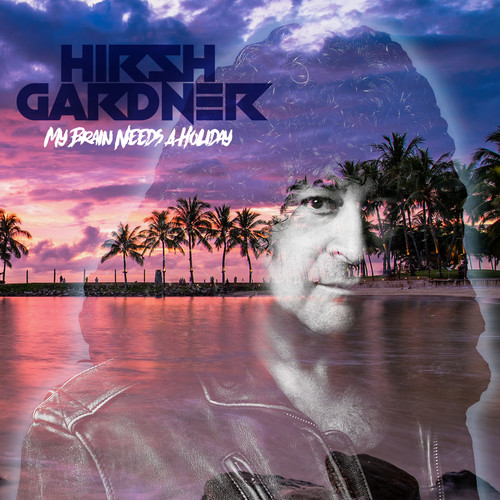 Hirsh Gardner is set to release his sophomore solo effort in August, 2017. Entitled "My Brain Needs a Holiday" this 10 song disc is the long awaited follow up to Gardner's acclaimed solo album "Wasteland for Broken Hearts": which is included in this package as a bonus disc. They are both full of AOR anthems and thunderous ballads. Moving to Boston, Mass in his teens, Hirsh attended the famed Berklee College of Music and studied there for 4 years. Soon afterwards Hirsh joined forces with future New England keyboardist Jimmy Waldo and along the way they also recruited future New Englanders Gary Shea and John Fannon. Initially going under the name Target the foursome felt they needed a different more dramatic moniker that reflected their many and varied influences, thus New England were born. In the years between 1979 and 1982 Hirsh was an integral part of one of the classiest AOR/Melodic Rock bands on the planet. New England released 3 world class albums (S/T, Explorer Suite and Walking Wild), working with top class producers such as Mike Stone, Todd Rundgren and toured extensively with the likes of KISS, AC/DC and Journey, but all good things come to an end and in 1982 Hirsh found himself looking for another band. A phone call from Kiss' Gene Simmons would take Hirsh and fellow New Englanders Shea and Waldo to LA to work with upcoming singer songwriter Vinnie Cusano. The band Warrior came to be but this was short lived as Cusano was quickly snatched up by KISS assuming the name Vinnie Vincent, so once more Hirsh found himself looking for a new direction. Taking on board lessons learned earlier from working with the likes of Stone and Rundgren, Hirsh was soon an "in demand" producer in and around the Boston area and worked with artists many and varied, Willie Nile, Mass, Shyboy and Vice just some of acts that benefitted from Hirsh's talents in the producer's chair. 1997 found Hirsh being awarded Producer of the year for the Boston Phoenix as well as being nominated 5 times in the Boston Music awards and winning it once in 1998.