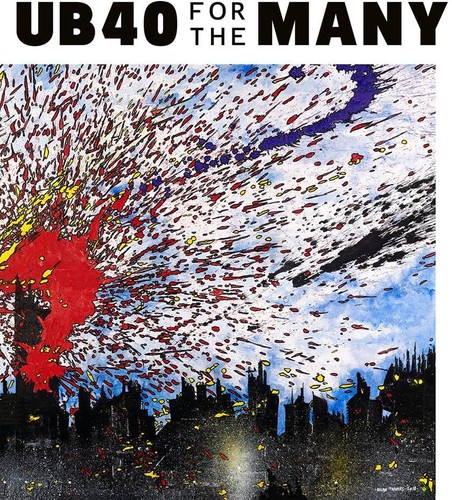 ''For The Many'' is the Birmingham reggae veterans' nineteenth studio album - their first since 2013's Getting Over The Storm Features UB40's founding members Robin Campbell (co-vocals/Guitar), Brian Travers (saxophone/keyboards), Jimmy Brown (drums), Earl Falconer (bass/keyboards/vocals) and Norman Hassan (percussion/vocals), alongside long-time members Duncan Campbell (vocals), Martin Meredith (saxophone), Laurence Parry (trumpet) and Tony Mullings (keyboards). Includes guest appearances from Birmingham rapper Gilly G, who features on the video Moonlight Lover and Jamaican artist/producer Kabaka Pyramid on Broken Man. UB40 are reunited with reggae deejays/artists Pablo Rider on I'm Alright Jack and Slinger on Gravy Train, both of whom appeared on the band's 1985 album Baggariddim. The album's closing track All We Do Is Cry sees the band collaborate again with British Asian urban musician Hunterz, who previously co-wrote and sang on UB40's single 'Reasons' from the 2005 album Who You Fighting For. In the same year, Hunterz performed the single on stage with UB40 and The Dhol Blasters at the Live 8 concert held in Hyde Park. Formed in Birmingham in 1978, UB40 named themselves after the UK government's unemployment benefit form. Their debut album Signing Off was released in August 1980 and is considered by many to be one of the greatest reggae albums ever released by a British band. It was the start of a career that led to 100 million record sales worldwide and dozens of hits, including Red, Red Wine, I Got You Babe and (I Can't Help) Falling in Love with You which all topped the charts across the world. The band had a run of hit albums that have spent a combined period of eleven years in the UK's Top 75 album chart, establishing UB40 as one of Britain's most successful bands of all-time.