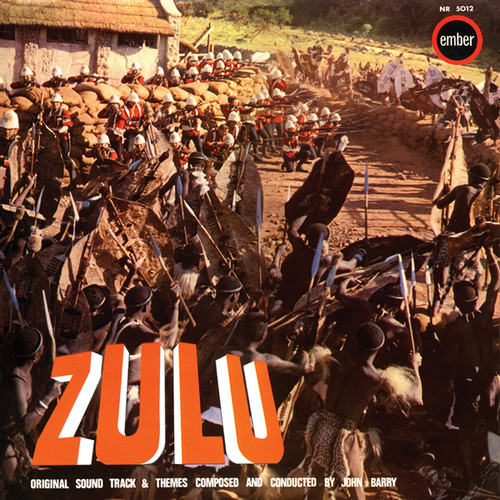 Originally released in 1964, Zulu is among the most popular of John Barry's early soundtracks, and the main theme is still frequently heard on radio, conjuring up images of the British Army's defense of (and the Zulus' fearless assault on) Rorke's Drift during the Anglo-Zulu War of 1879, as depicted in Cy Endfield's BAFTA-nominated 1964 film starring Stanley Baker, Michael Caine, and Jack Hawkins. John Barry (1933-2011) was one of the best-known composers of film music in the world. His early career found him working as in-house arranger for EMI, leader of hit instrumental combo the John Barry Seven, and composer, arranger, and conductor on the first UK soundtrack LP (the 1960 Adam Faith vehicle Beat Girl). After Barry's involvement as arranger on the first James Bond film, Dr. No, in 1962, he was appointed as primary composer for the film franchise. In 2002 he received the GoldenEye award, courtesy of the Ian Fleming Foundation. Originally released in 1964 on the British indie label Ember Records, the LP comprises soundtrack music (with two of the tracks incorporating narration by Richard Burton) and "A Selection of Zulu Stamps," which are essentially beat instrumentals flavored with southern-African influences performed by the John Barry Seven. Ember initially pressed the album in mono, switching to stereo for a 1972 reissue (same catalog number), although a stereo pressing had previously surfaced in the USA. Long unavailable on vinyl, Zulu is now reissued by Fantastic Voyage as a 180-gram pressing, mastered from original stereo tapes. The vinyl is housed in the original Ember sleeve artwork, and bears the label design prevalent at the time of the stereo pressing. John Barry went on to score many notable soundtracks, including the award-winning Born Free (1966), The Lion in Winter (1968), Midnight Cowboy (1969), The Cotton Club (1984), Out of Africa (1985), and Dances with Wolves (1990). In 1999 Barry was appointed OBE for services to music.