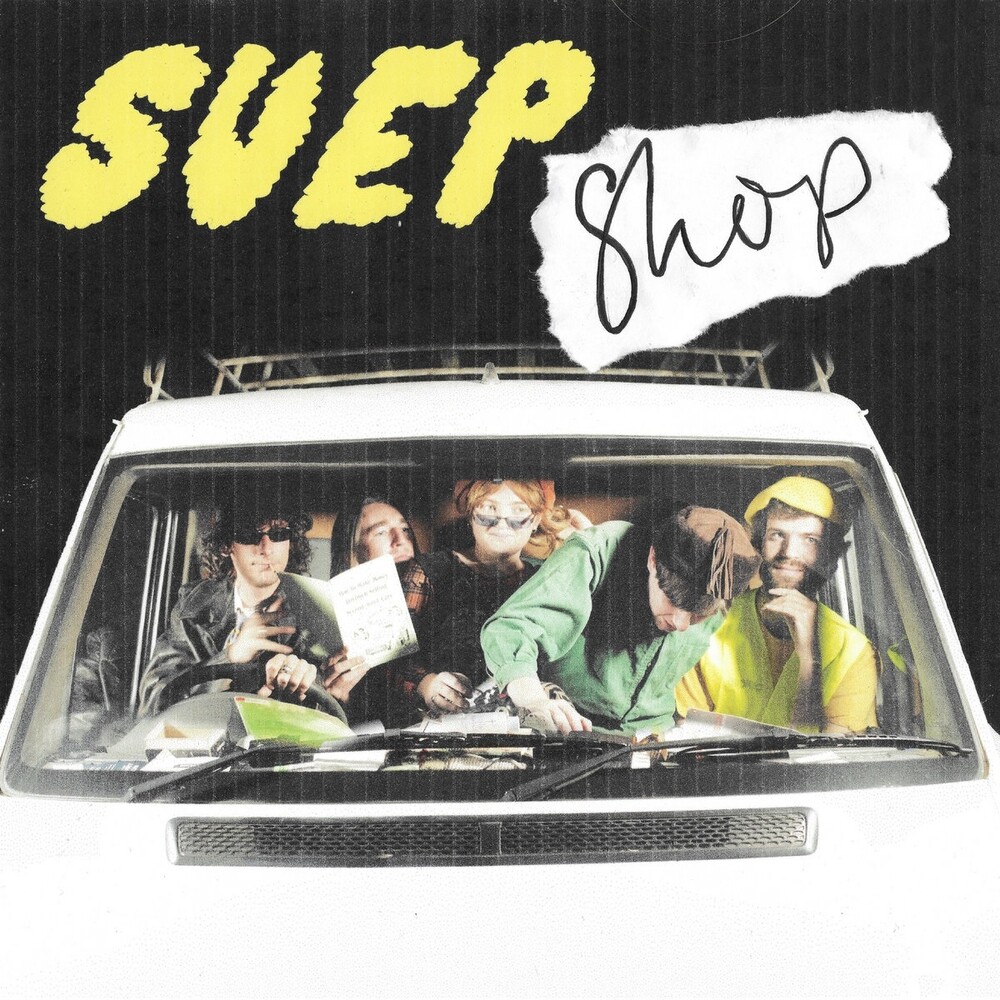 Limited black vinyl. London-based 'indie-supergroup' Suep announce their long-awaited debut mini-album Shop, a collection of 6 oddball, car-boot-sale pop songs with a sprinkling of theatrical storytelling. Led by Georgie Stott (of Porridge Radio, Garden Centre) and Josh Harvey, Suep was born out of a near-decade of playing in sheds and barns with like minded personnel, holding a mutual love for Paul McCartney, Jona Lewie, the B-52s, Devo and other performative freaks enjoying themselves. Following a move to London from Brighton, the pair added George Nicholls (The GN Band, Joanna Gruesome, The Tubs), Will William Deacon (PC World, Garden Centre), and Ollie Chapman (Boil King) to the line-up. The 5 piece take turns writing songs and taking the lead vocal duties in a wonderfully playful but coherent collaboration, with their debut being a kaleidoscopic off kilter pop ride, taking the listener through haunted castles, deprived encounters, days lost to the imagination in bed, and through the integral friendships that give Suep the energy to keep dancing to their own beat. The album was arranged and recorded in the Red Lion Boys Club, an ex-youth centre in which Georgie and Josh both lived. Using equipment collected by Josh in his travels as a bootsale and market trader, the sports hall was transformed into a makeshift studio for a few days, with sessions conducted by producer Matthew Green (Sniffany & The Nits, The Tubs, etc.) Mark Riley (BBC 6 Music) described Suep's debut single and album opener, 'Domesticated Dream' (2021) as "perfect pop music." The joyfully kitsch track brims with a 70s Yamaha disco beat, deep bass, nostalgic drum machines, and hooky melodies. Possibly the most psychedelic and infectious track born out of lockdown, it tackles homelife, drinking too much, and making big plans that never come to fruition, but with a big technicoloured positivity for the future of the human-race, with the chorus' refrain, "the psychedelic 4000s," predicting the return of the psychedelic Age of Aquarius in a couple of millennia time. The following single 'Misery' (2021) is pure cosmic swing-pop wizardry in part inspired by spy music and The Supremes. Ollie, The track's baritone vocalist, describes it as "A love song disguised as a song about loss. It's about cherishing the things that matter but it's also about having the courage to say goodbye," with each line of the song a small story about a different character. Whilst latest Shop taster 'In Good Health' is darkly euphoric like a pleasantly strange meeting of Siouxsie Sioux and Jona Lewie. It's a playfully discombobulating mix of 80s jangly guitar, chirpy keyboard and moody post-punk tackling mental health, drug addiction, and the power of friendship, written after the song's vocalist Georgie came out of hospital following a mental health crisis. "I wanted to write a song that encapsulated how important my relationships with my friends and boyfriend were at that time" she explains "... and one that also felt dark like I did at the time. I couldn't go outside due to anxiety surrounding my health so I stayed inside for weeks. People would visit and watch films with me or let me tattoo them or make music with me. My community helped me recover." Elsewhere on Shop is 'Just The Job' fronted by Harvey and described by him as "About the relief of accepting a menial existence, and allowing life to be boring - but (within that) how the small things are the important ones, how pulling a sicky or extra long lunch break are important things to do for yourself. It's an anthem for working people who've had enough - and a crowd favourite at Suep gigs. The darker undertones and post-punk angles of the Georgie-fronted 'Onions' is inspired by the crapness of cliques, with the band calling the song "A cry of welcome to all;" and finally the hooky 'Friend of Mine,' described as "A love letter to all the people that come and go throughout your life no matter how long you know them". Suep have received coverage in Independent & Clash, (among many others), with big support from Mark Riley and Steve Lamacq (BBC 6 Music) for early singles.