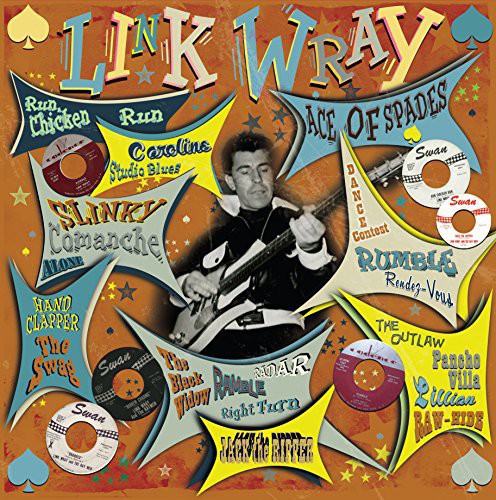 The premium cuts by the legend that is Link Wray remastered on limited colored vinyl with free CD, stunning artwork by Sophie Lo and liner notes by Author Nina Antonia. It will surely come as no surprise that Quentin Tarantino picked up on Link Wray's 'Rumble' and 'Ace of Spades' for the movie 'Pulp Fiction'. The brooding guitar man; born in North Carolina in 1929, as Fred Lincoln Wray Jnr, hails from pulp territory - the mythic Americana of rock n' roll. Wray's mother, from whom he inherited his striking appearance, was a Shawnee Indian, his father was a street corner preacher and grandpa did some jail time. Whilst having contracted tuberculosis when serving in the Korean war affected Wray's vocals, his guitar playing mostly did the singing for him, but he wasn't always volatile - 'Lillian' and 'Alone' revealing the heart beneath the tough exterior. Fiercely independent, when the rock n' roll boom burst, Wray fashioned a 3-track home studio from a chicken shack and largely extricated himself from the music business although he would continue to record and play, stating 'Money don't rule me, record companies don't own me.' Nothing owned Link Wray but he owned rock n roll. Though the era of monochrome had ended, Link cast a long shadow, drawing admiration from the likes of Neil Young, Keith Moon and Pete Townshend who noted of Wray 'He is the king, if it hadn't been for Link Wray and 'Rumble', I would never have picked up a guitar.' Though often marginalised throughout his career, Wray was like the night, an unquantifiable influence on successive generations of guitarists who sought to scorch rather than soothe. In November 2005, Bob Dylan was just about to step out on stage at the Royal Hall Albert, when he learned that Link had struck his final chord. In tribute to the great man, Dylan commenced his set with 'Rumble.'