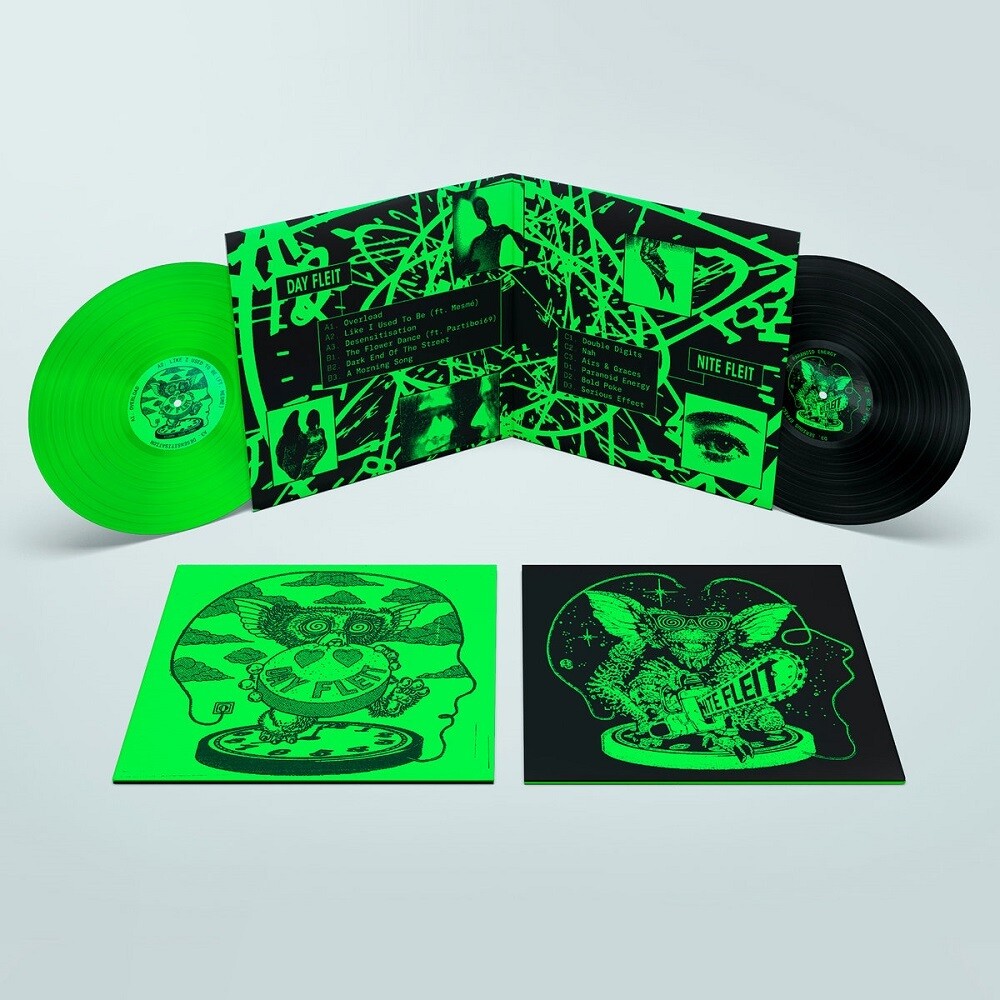 Nite Fleit steers a course through electro, breaks, techno and acid to deliver a debut LP made up of two distinct halves, exploring contrasting emotional states and new sonic territories.Shifting between styles, emotions and eras with ease and hiding surprises around every corner, Nite Fleit owes her rapid rise as a DJ and producer to an ability to keep dancers perpetually on their toes. Coming up through Sydney's underground club scene, the Australia-born, London-based artist started producing as recently as 2016, making her production debut for Steel City Dance Discs in 2018. Since then she has appeared on labels across the globe including Return to Disorder, Planet Euphorique, Unknown To The Unknown, International Chrome, Acid Avengers and her own imprint, Atomic Alert.'Day Fleit / Nite Fleit' is an LP with no front or back cover - depending on the listener's intended destination the album's two discs can be listened to in either order. 'Overload' wastes little time in setting the tone for 'Day Fleit'. Densely layered, soaring arpeggiated acid lines twist and dance around Nite Fleit's spoken lyrics, inspired by Delia Derbyshire and Barry Bermange's iconic 1964 'The Dreams' sound collage. On 'Like I Used To Be' warm, dreamy chords are decorated with sparkling synth melodies and vocals from Nite Fleit's friend and fellow producer Mesme. From the triumphant EBM textures of 'The Flower Dance', which features a theatric monologue by Partiboi69 reciting an Alan Watts speech, to the video-game pop melodies of 'Dark End of the Street' and 'Morning Song', on 'Day Fleit' Nite Fleit infuses her sound with a new buoyance and musicality.On the flip, those rich colorful harmonies make way for the imposing, mechanical rave energy on punishing percussive techno and electro cuts like 'Double Digits' and 'Nah'. Nite Fleit's graceful acid lines turn feverish and frenzied on 'Airs & Graces' and 'Paranoid Energy' - a pair of break-heavy, mutant club tracks fine-tuned for dark and manic basement raves. 'Bold Poke' provides a moment of brooding, melodic respite, before 'Serious Effect' a cinematic closing electro workout. Across these 12-tracks, taken from a vast pool of demos sketched out over the last two years, Nite Fleit provides a sonic snapshot of swinging emotions and dancefloor yearnings, delivered with uncompromising energy, melody and contrast.