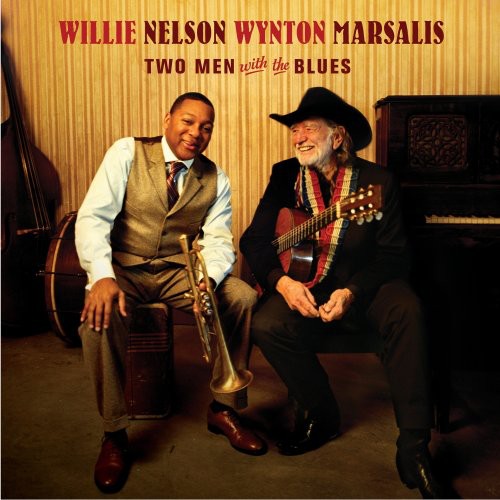 The event was simply billed as "Willie Nelson Sings the Blues," but the historic two-night stand on January 12 and 13, 2007 at Jazz at Lincoln Center was far more than that. Call it a summit meeting between two American icons, Willie Nelson & Wynton Marsalis, two of the most significant figures in modern-day country and jazz, who discovered common ground in their love for jazz standards and the blues. Their performance stirred the sounds of New Orleans, Nashville, Austin and New York City into a brilliantly programmed mix that was equal parts down-home and cosmopolitan, with plenty of swing and just a touch of melancholy.

This is hardly as unusual a pairing as it might at first appear. First off, the far-from-discerning Willie might damn well appear on your record if you've got the cash. Second, he and Wynton share a genuine appreciation for the tradition of American song. Of course, Marsalis has been accused of being unduly respectful a preservationist, while Nelson plays faster and looser than some might like. And indeed, these not quite opposites bring out the best in each other'"though not in the way you might first expect.

True, Nelson's presence loosens up Marsalis, but, more importantly, his role as a sideman disciplines the trumpeter, who makes every note count. Even better, the album reveals Nelson as the exquisite musician those who haven't seen him live might not even know he is. "Caldonia" showcases Nelson's underrated guitar work and some great throwaway vocals. Nelson has definitely been stronger on "Stardust" before, though, pro that he is, he compensates for a weak warble with some elided phrasing.

In fact, this turns out to be an even more exciting pairing than it might at first appear. The tracklist reveals several beyond-obvious choices, many of which Nelson has recorded at least once. But there's a charming breeziness to the proceedings, culminating in the sly clowning of "My Bucket's Got a Hole in It," which features one of two Marsalis vocals. (The other surfaces on "Ain't Nobody's Business.") The concept, as the lyrics of "Basin Street Blues" reveal, may be that music has always been the place "where the white and dark folks meet." And if the July 4 release date is a bit gimmicky, it's the right sort of gimmick.