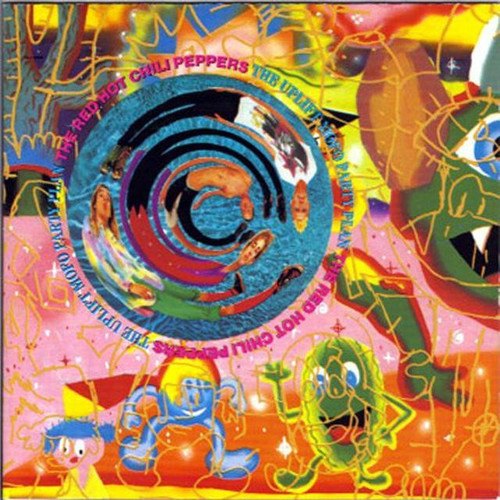 The Uplift Mofo Party Plan is the third studio album by American rock band Red Hot Chili Peppers, released on September 29, 1987 on EMI Records. Due to prior obligations resulting in temporary personnel changes following the band's formation in 1983, The Uplift Mofo Party Plan is the only studio album to feature all four founding members of the band on every single track: vocalist Anthony Kiedis, bassist Flea, guitarist Hillel Slovak, and drummer Jack Irons. The record features the band's signature funk rock musical style, but also draws influences from reggae and heavy metal. For the album, the Red Hot Chili Peppers recruited new producer Michael Beinhorn, who encouraged the members to expand their musical horizons in order to create a more diverse work. The recording process was difficult due to Kiedis' drug addiction; however, the band was ultimately content with it's work on Uplift. Flea later referred to the album as "the 'rockingest' record" the band has ever made. The album was more successful than it's predecessors both critically and commercially, and was the band's first album to enter the Billboard 200, where it charted at number 148. Although Uplift's follow-up Mother's Milk would reach Gold first, The Uplift Mofo Party Plan would go on to become the band's earliest effort to do so. Following the tour to promote the album, Slovak died of a heroin overdose and shortly after, Irons decided to quit the band, unable to cope with his friend's death.