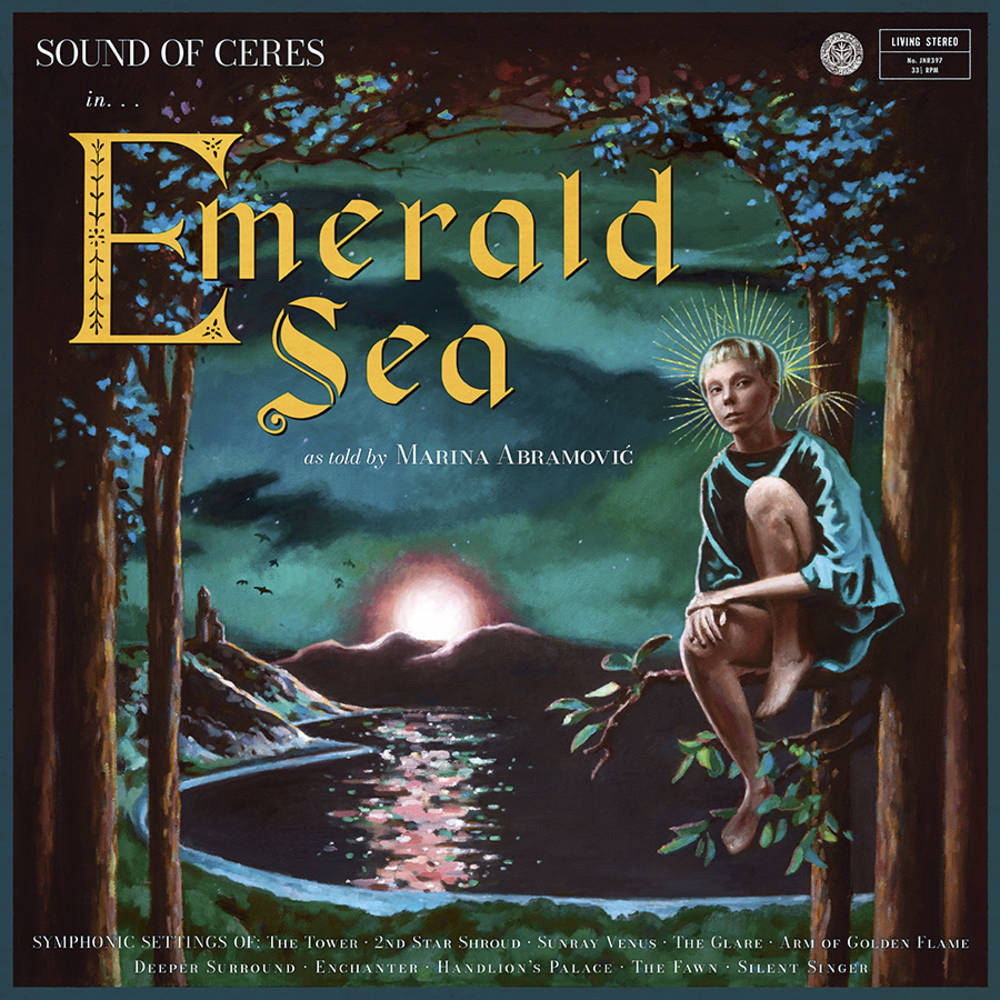 Emerald Sea, the third album from New York-based audiovisual projectSound of Ceres, tells the story of how the universe comes to know itself.Rendered in dynamic, ambitious orchestral passages, it forms the basis of future stage performances intended to draw its half-submerged narrative into the visual sphere. In its dreamlike impressions, it could also be the soundtrack to a long-forgotten early musical film - an experience that delighted and transported audiences and then vanished from record, surviving only in the imprint of memory.

Written in three acts, Emerald Sea follows two deities who trail each other through the furthest reaches of experience. There is the Universe, all that exists, voiced by performance artist Marina Abramović. And there is Venus, transformer of matter and avatar of love, sung by the group's lead vocalist Karen Hover (who goes by k).

Through a dazzling suite of songs inspired by Les Baxter's midcentury exotica, Maurice Ravel's balletDaphnis et Chloé, and Gustav Holst's The Planets, Emerald Sea studies intimacy on both an interpersonal scale and a cosmological one. Connection and severance, joy and grief, wonder and bewilderment all tumble through its scope. In the widest frame, the universe begins, meets itself, and ends. In the closest frame, two people encounter each other, grow close, and then separate. These stories are two views of the same fractal. In every intimacy human beings cultivate, every rush of connection, no matter how fleeting, we reenact the universe for ourselves.

"I envisioned myself journeying through these different realms -- space, the land, the sea, the heavens -- and following Marina's character," says k. "I always saw her as a shadow figure that I couldn’t quite figure out."

In its current cycle, Sound of Ceres is Derrick Bozich, songwriter, harpist, and flautist; Jacob Graham, synthesist, costumer, and light designer; K Hover, vocalist, lyricist, costumer, and choreographer; andRyan Hover, songwriter and producer. They recorded Emerald Sea in collaboration with Jon Sonneberg at Ka-Boom studio in Ohio. It was mixed by Nicholas Principe and mastered by Kramer.

Ryan says, "The album’s story is an allegory for the emergence of mind and meaning from the matter of the universe, and its eventual fading, with a glimmer of hope at the end."

When you receive it, when its sounds in motion light up your mind's eye, it is created in collaboration with you.