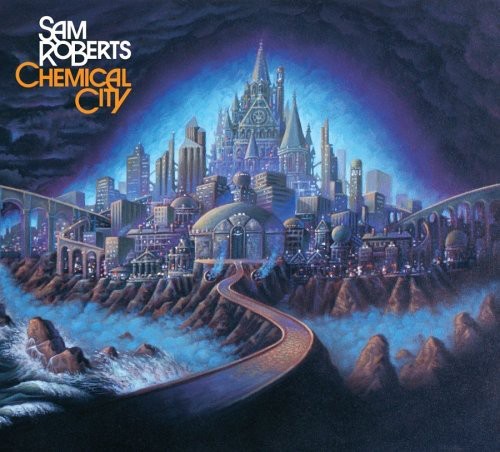 Recorded over the past year in Newyrbar, Australia and Montreal, Chemical City follows up their hugely successful debut We Were Born in a Flame which was adored by the US media and earned rave reviews in Entertainment Weekly, People, New York Times, USA Today, Blender, Spin, Elle and Vanity Fair, as well as performances on the Tonight Show with Jay Leno, Late Night with Conan O'Brien and the Late Late Show with Craig Kilborn, just to name a few. Behind Sam is a 3-year rocket ride that boosted a Montreal indy rocker to a new level, landing 3 number one Canadian singles, playing Live 8, opening the 2003 SARS benefit before a crowd of half a million, and winning 3 Juno Awards (Canada's Grammy Award). Chemical City, which was produced by Sam Roberts, Joe Donovan and Mark Howard (Lucinda Williams, Bob Dylan) is a continuation of the retro-sometimes-psychedelic rock of his debut. This sophomore album thrusts Roberts and his bandmates lead guitarist Dave Nugent, guitarist/keyboardist Eric Fares, bassist James Hall and drummer Josh Trager back into the spotlight.