The Mars Volta - The Bedlam In Goliath | RECORD STORE DAY 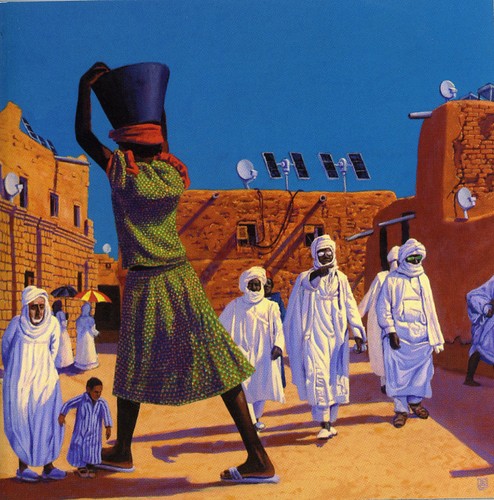 Though Omar Rodriguez-Lopez and Cedric Bixler Zavala did time in popular Emo band At The Drive-In, their subsequent project the Mars Volta is a horse of an entirely different color. Instead of punk, the pair takes their influences largely from 1970s prog rock and fusion. The most critically acclaimed American rock band is back with their fourth studio album, The Bedlam in Goliath.

''The Bedlam in Goliath'' is the fourth full-length studio album by American progressive rock band The Mars Volta. It was released on January 29, 2008, and January 26, 2008 in Australia through Universal Motown Records. The album debuted at #3 on the ''Billboard'' 200, becoming the band's highest charting release after selling over 54,000 copies in its opening week and 153,000 copies total as of June 2009 .

Produced by guitarist Omar Rodríguez-López with engineer Robert Carranza, the album's creation process was subject to "bad luck controversy" after the band's bizarre experience with a ouija that Rodriguez-Lopez bought as a gift for Cedric Bixler-Zavala. "Wax Simulacra" was released on November 19, 2007 as the album's first single, coupled with a cover version of "Pulled to Bits", originally by Siouxsie and the Banshees. Vinyl editions of the album include a ouija inside the gatefold, claimed to be the band's own take on the board they previously owned. "Wax Simulacra" won at the 51st Grammy Awards for Best Hard Rock Performance.

Having previously contributed the artwork to the 2006 release of ''Amputechture'', Jeff Jordan was again brought in to handle the illustrations for the album, creating 11 original paintings to coincide with the theme of ''The Bedlam in Goliath'', as well as including a piece from his own gallery. The piece used for the cover is entitled "Agadez". - Wikipedia