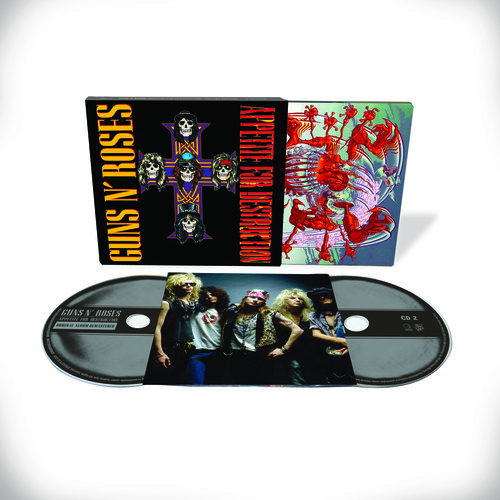 Following the group’s 1985 formation, Guns N’ Roses injected unbridled attitude into the burgeoning Los Angeles rock scene. They went on to captivate the entire world with the July 21, 1987 release of Appetite For Destruction, which remains the best-selling U.S. debut album ever, moving over 30 million copies globally. Appetite features such indelible tracks such as the No. 1 single “Sweet Child O’ Mine,” “Welcome To The Jungle,” “Nightrain,” and “Paradise City.”

The Appetite For Destruction: Deluxe Edition features 2CDs of highlights from the box and Super Deluxe Edition with the album newly remastered for the first time ever, selections of B-sides and EP tracks, and 7 unreleased recordings from the 1986 Sound City Session, “Move To The City (1988 Acoustic Version)” from the GN’R Lies session and “Shadow Of Your Love” from the November 1986 first ever recording session with the album’s producer Mike Clink.