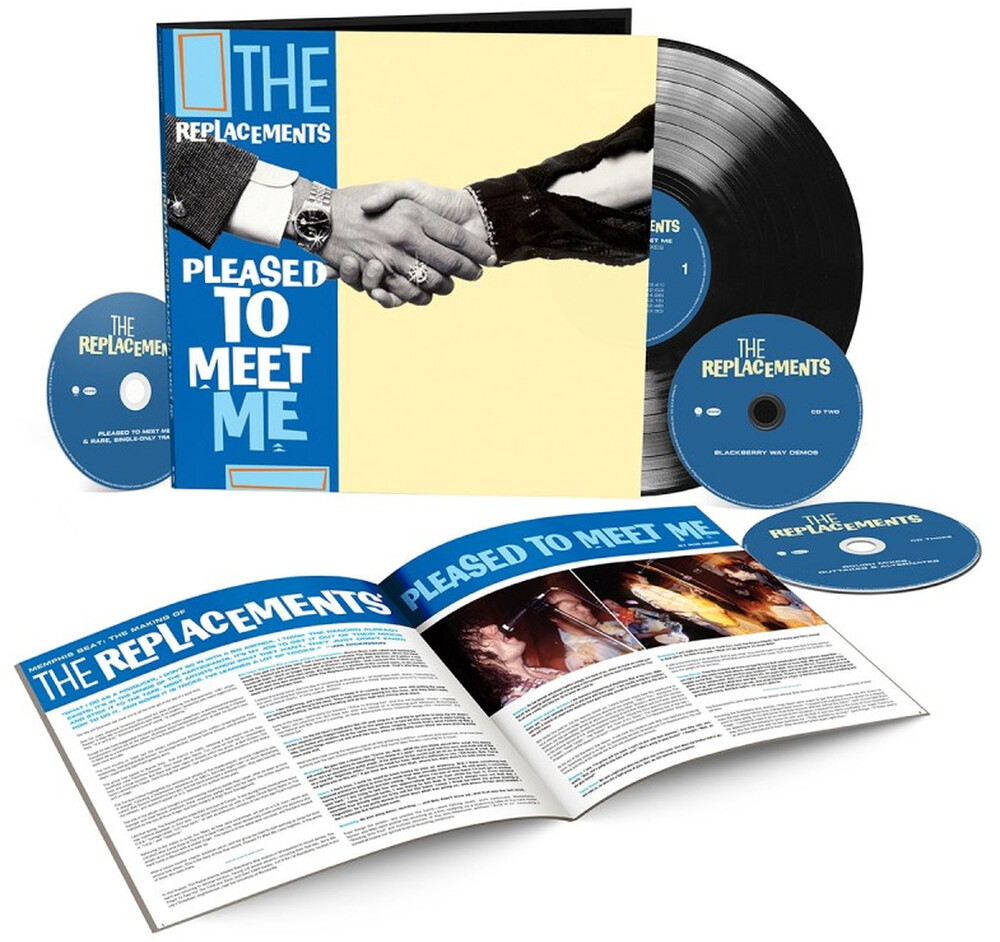 Pleased To Meet Me is the critically acclaimed fifth studio album by the American rock band The Replacements. Released in 1987 by Sire Records, Pleased To Meet Me is the only album recorded by the band as a trio, after original guitarist Bob Stinson acrimoniously left the band. Following last year’s widely acclaimed Dead Man’s Pop release, Pleased To Meet Me will be receiving a similar ‘deep dive’ treatment with a 3-CD/1-LP deluxe boxed set, which will tell the story of the album in ways not previously possible with more than 50% of the content previously unreleased.

The making of Pleased To Meet Me was a transformative journey for The Replacements, one that began with the combustible Minneapolis combo on the brink of collapse and culminated in one of the definitive albums of the band’s career. That transformation is chronicled in-depth on the group’s latest boxed set, PLEASED TO MEET ME (DELUXE EDITION).

More than half of the music (29 tracks) on this Deluxe Edition set has never been released, including demos, rough mixes, and outtakes as well as Bob Stinson’s last recordings with The Replacements from 1986.

The music is presented in a 12 x 12 hardcover book loaded with dozens of rarely seen photos along with a detailed history of the Pleased To Meet Me era written by Bob Mehr, who authored The New York Times bestseller, Trouble Boys: The True Story of the Replacements.

Pleased To Meet Me was recorded over three months at Ardent Studios in Memphis with legendary producer Jim Dickinson before it debuted in June 1987. The collection opens with a newly remastered version of the original 11-track album along with a selection of B-sides and a version of “Can’t Hardly Wait” that was remixed by Jimmy Iovine. All of the music included in this boxed set has been remastered by Justin Perkins, who remastered the band’s widely acclaimed 2019 boxed set, Dead Man’s Pop.

The second disc explores the creative process behind Pleased To Meet Me with 15 demos, 11 of which are unreleased, that were recorded at Blackberry Way Studios in Minneapolis during the summer of 1986. The first seven of these demos represent the last recordings made by all four original members of The Replacements. After those demo sessions stalled out, singer/guitarist Westerberg, bassist Tommy Stinson, and drummer Chris Mars made the painful decision to part ways with lead guitarist Stinson after recording five albums together.

The disc’s remaining eight demos feature the band as a trio and include “Shooting Dirty Pool,” two versions of “Kick It In,” and “Even If It’s Cheap,” whose opening line (“Pleased to meet me/the pleasure’s all yours”) would ultimately inspire the title of the album.

The collection’s final disc features 13 previously unreleased rough mixes by studio engineer John Hampton that include the majority of the album along with non-album tracks like “Election Day” and “Birthday Gal.” These rough mixes are also featured on the 180-gram vinyl record included in the set.

Rounding out the collection are several unreleased tracks (Westerberg’s “Run For The Country” and “Learn How To Fail,” Stinson’s “Trouble On The Way”) along with a selection of outtakes (“Beer For Breakfast” and “I Don’t Know”) that debuted on the 1997 compilation, All For Nothing/Nothing For All.