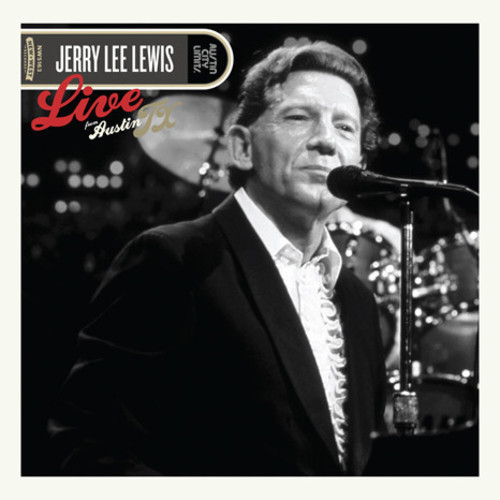 “Rock and Roll’s the thing and Jerry Lee’s the King …” or so said an English fan once upon a time somewhere. Elvis fans might dispute that title, but nobody else in the history of popular music would dare call himself “The Killer.” Of all the legends who came out of Sun Records in the 1950s – Elvis, Johnny Cash, Carl Perkins, Roy Orbison – no one would have bet the last one standing would be the pill-popping, whiskey-guzzling, gun-waving hellion from Ferriday, LA except The Killer, of course. Jerry Lee Lewis took black rhythm & blues, white gospel and other funky Mississippi sounds and turned them into rock and roll. But Jerry Lee’s life also is, and has always been, his piano; he has kicked and banged and set on fire (literally) many of them over the course of six-plus decades. He almost never made it to Austin City Limits. He cancelled one appearance and, only weeks before this recording on October 17, 1983, his wife died in a freak swimming pool accident at their home. But he did make it, and what we have here is one of the most amazing performances ever to go down on the ACL stage. Throughout the day he was a perfect gentleman, showing up on time and acting very graciously to one and all, but once he hit the stage, all hell broke loose. The songs speak for themselves; they’re ALL here. For many years later, Jerry Lee would carry a tape of this show to play for friends (and himself, many times). When I tried to book him again for a return performance, the response was, “Jerry Lee doesn’t think he could possibly do a better show.” – Terry Lickona (producer Austin City Limits®)