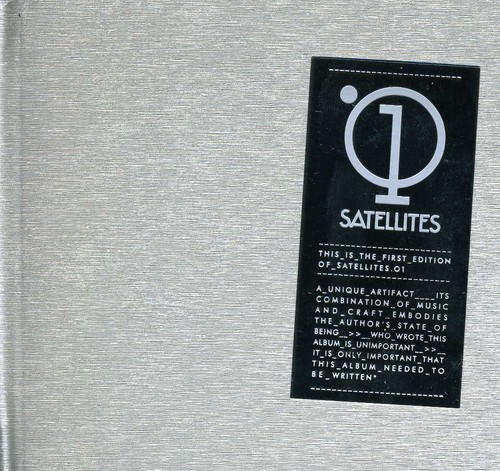 01 was originally given a limited release, available only through Rough Trade shops. It sold out within a few weeks and became something of an underground hit. The album is now being given a full scale release, with some fine reviews already coming its way.
Satellites is in fact not a band but one man, Englishman Johnny Vic who lives in Copenhagen. On the album he has created a full band sound, playing all of the guitar, piano, strings and horns himself. The nine tracks give us a good idea of Vic’s talents, with well crafted songs delivered in a deep and expressive voice. The vocals are generally the dominant factor, but the mix of piano and subtle electronic sounds create an always interesting sound.
The songs are generally slow paced, a languid style with lush and multi layered backing. Yet occasionally there are sweeping moments as the music grows in big, almost choral, phases where the vocal harmonies and instrumentation builds suddenly to create something grand. The massive ending to Calm Of The Water is perhaps the most stunning example, a beautiful effect created with a subtle bass line running through it.
In The City begins the album with a folky guitar and rich, warm vocals. The track soon builds into a much more expansive pop song, a piano driven ode to alienation. It works well, the multi tracked vocals giving real depth to the music. Railway Line comes next, its gentle piano opening backing the passionate vocal delivery. Again it rises and swells into something memorable.
While the opening two tracks are perhaps the best on the album, there are others worthy of note too. Where Love Lies Bleeding is a gorgeous love song with impassioned vocals and some fine guitar work towards the end. A Boy Cries Wolf features far more guitar than most of the tracks, and stands out for this reason, as well as another fine and emotional vocal delivery.
The closing Sale Of The Century starts slowly, the piano over an electronic him. The vocals kick in, slow and poignant, as the track builds. It’s an interesting ending to the album, leaving a feeling of weariness yet of accomplishment at the same time. At over eight minutes long it perhaps could have been edited down a little, but that’s being picky.
Johnny Vic has created a real buzz with this debut album. It has a grand sweeping feel to it, yet there are moments of stylish introspection in there too. It’s well worth having a listen to, if only to see what all of the fuss is about.
And if you like it then you won’t have too long to wait for the follow up. The next album, unsurprisingly called Satellites.02, will be released in March.