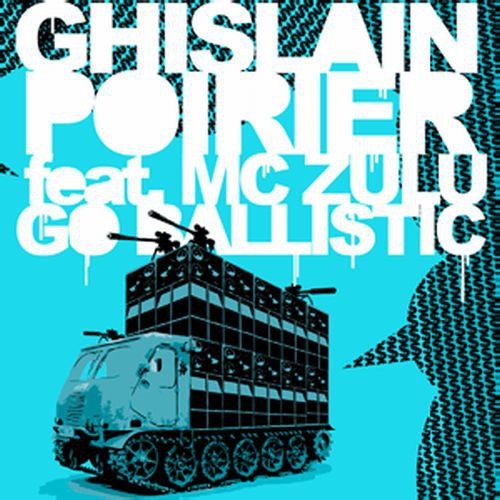 MC Zulu, Panamanian born, Chicago raised, jumps off on the third single from Ghislain Poirier's No Ground Under. Go Ballistic is a soca-drenched club banger that unashamedly blows up the spot. MC Zulu comes through with a melodic hype vocal that keeps energy high in the mix. Having released many solo efforts plus collaborations with Ace alone, Kush Arora, and DJ C, MC Zulu is hot property these days (just check his recent feature in XLR8R). Remixers Toddla-T and Duckbeats give the beat a house shuffle treatment that rivals the original in dancefloor mayhem. Not surprising, since Toddla-T has been making inroads remixing Hot Chip, Tricky, Little Dragon, Roisin Murphy, and Kid Acne as well as doing some production on the upcoming Roots Manuva album, Slime and Reason. Duckbeats is Chris Duckenfield, a seasoned veteran of electronic boogie music from the old school WARP roster as RAC and one of the house-heads behind SWAG. King Cannibal is a new signing to Ninja Tune (keep an ear out for the upcoming Arigami Style single) and he toughens up the track to a near techno frenzy of hard beats and defunct rave noises that replaces some of the joy of the original with menace. Ghislain Poirier enlists a buddy by the name of Tony-O, from Parisian crew Ego6, to round out these remixes. He peps it up and plays on it's doubletime soca feel for an over-the-top interpretation that makes the listener understand why Poirier was attracted to him in the first place. Another underground party smashing hit from Ghislain Poirier. Go ballistic!