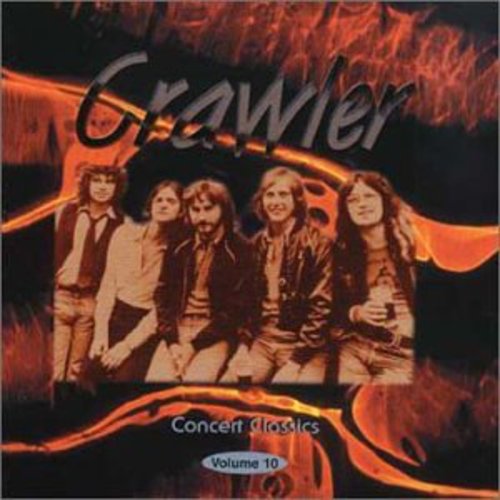 Crawler - Signed to Atlantic Records by Ahmet Ertegun on a $250, 000 worldwide deal, the AngloAmerican line-up comprised: Paul Kossoff (guitar), Mike Montgomery (keyboards), Tony Braunagel (drums), Terry Wilson (bass) & Terry Slesser (vocals). The band completed a nine-date UK tour in May and June 1975, then finished their debut album, The Band Plays On, which was released September 1, 1975, on the back of a massive publicity campaign. An extensive tour was announced to coincide with this release, but Kossoff was taken ill with a stomach ulcer and the tour was cancelled. Whilst at the clinic, Kossoff's condition worsened and he was taken to a hospital where he went into cardiac arrest and actually 'died' for 35 minutes. After a month of recovery, Kossoff made an appearance on the UK TV show Old Grey Whistle Test (October 1975) and four new dates - Liverpool, Glasgow, Newcastle and London - were arranged for November. These showed the band under-rehearsed and Kossoff struggling, though. Prior to a U.S. tour at the start of 1976, Montgomery was replaced by ex-Free keyboard player John 'Rabbit' Bundrick. However, once again, Kossoff's ill health meant too many shows were cancelled or postponed. Recording of the follow-up album 2nd Street took place whilst the band were in Los Angeles, but much of the guitar playing was the work of 'Snuffy' Walden. With Kossoff in better health again and the band headlining four nights at the Starwood Club, Los Angeles, Kossoff was delighted that ex-Free colleagues, Paul Rodgers and Simon Kirke (headlining with Bad Company at the Forum), joined him on stage for two nights. A British tour was set to begin on 25 April 1976, coinciding with the launch of the second album, but Kossoff died of a heart attack on an overnight flight from Los Angeles to New York on 19 March 1976. Recordings from one of the UK concerts in 1975 were later released under the title Live at Croydon Fairfield Halls 15/6/75.Back Street Crawler continued, under the name Crawler, with Geoff Whitehorn on guitar, but they were dropped by Atlantic after failing to replace Kossoff with a big name. They were instead signed to the Epic label, with a line-up consisting of Terry Slesser (vocals), Terry Wilson (bass), John Bundrick (keyboards), Geoff Whitehorn (guitar), and Tony Braunagel (drums). Crawler initially toured the UK with a CBS package, which included label mates Boxer and Moon, but their debut release, Crawler (1977), did well in the USA, thanks mainly to the track Stone Cold Sober, a hit on FM radio stations. The band then concentrated on the American market and released a second album, Snake, Rattle & Roll in 1978. At the end of a US tour, in December 1978, keyboard player John Bundrick left for The Who and the band folded soon after. The live albums, Snakebite (2001) and Pastime Dreamer (2003), recorded during tours in 1977 & 1978, appeared thanks to John Bundrick's private collection of recordings.