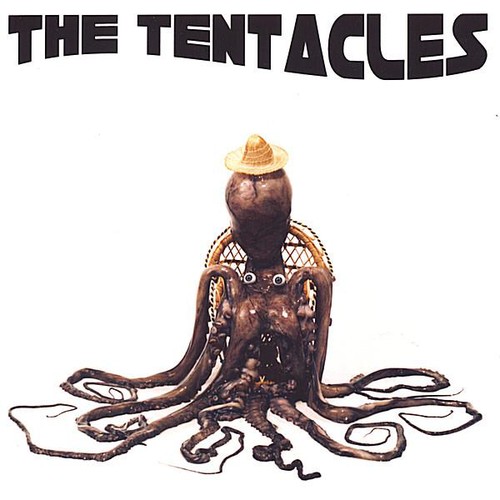 The Tentacles By Jim Wilson NEW YORK CITY, Jan 3 - Good natured and jocular, this can't possibly be the right man!  He's six foot five and square jawed.  He looks more like a quarterback than a musician.  But, this is indeed the Sam Crees of The Tentacles, which I've heard so much about.  He leads me up three flights of stairs to a door adorned with several heavy locks and a sign that reads 'Laboratory.' The room is full of exotic instruments and crystals. Strange half assembled analog keyboards, tubes and circuits strewn about.  I look around as he quietly sits in a throne like chair made entirely of antlers.  He begins to play a didgeridoo stopping now and then to explain the concept of circular breathing, or attempt some Tibetan throat-singing. He tells me about his childhood, chores on the farm, the rhythm inherent to menial labor, building a wash tub bass, his discovery of Zen, the rules of Greco Roman wrestling, the ephemeral beauty of wind though the trees, the Mayan Calendar, and his adventures at sea.  He has a lot to say.  I ask him about the influences, which abound in the music of The Tentacles, and he grows silent, inward. He leans back and pulls a pipe from his overalls, which he lights.  I press him again.  'Haven't I been telling you all along?'  His face then grows dark, almost wrathful.  Then he chuckles. 'Let me make you a cup of Jasmine tea.' Mr. Teraberry is rather taciturn in appearance and demeanor.  He's about five foot two and his head is entirely bald and misshapen excepting three or four long greasy hairs that sprout from the top.  I visit him at his dank dark basement apartment.  Clutter everywhere.  Coffee cups overflow with cigarette butts.  He wears a dirty blue bathrobe. Aviator sunglasses obscure his rat-like eyes. Like so many musicians Peter got his start singing with the church choir.  Later as a youth Minister he started picking a guitar to accompany his message.  'You know the music helped me break through to these kids.'  But after a propane explosion killed the family dog he became disillusioned. 'Jesus, he hung out with prostitutes, tax collectors, lepers, people like me. All those do gooders make me sick.'  He never returned to the ministry.  I mention to him that The Tentacles seem to lack any professionalism.  'You're sure as shit right!' shouts Peter.  'There is a rich musical heritage in America, and it wasn't made by any professional musicians.  This music sprung from the fraternal bond between men and women who gathered for no other reason except the joy of playing simple and pure music together.  This music was created on front porches, in plantation fields, at hoe-downs, around campfires, and now it is being created in a brownstone in Brooklyn, by two men who call themselves The Tentacles!'