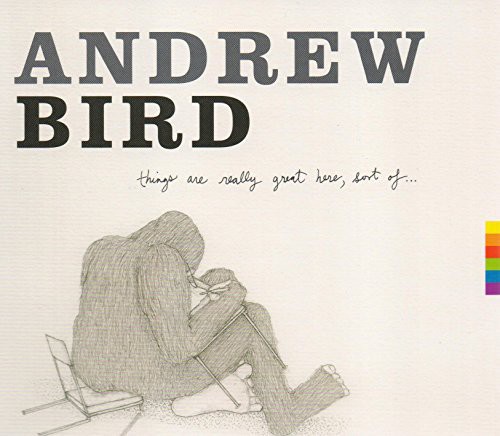 Things are Really Great Here, Sort Of .... is the latest self release by Andrew Bird, consisting of his versions of songs by a band he has loved for many years, The Handsome Family. The Handsome Family is husband and wife duo Brett and Rennie Sparks, who have collaborated as a couple for more than 20 years. The band has garnered widespread clinical acclaim, Spin says ''The songs are an effortless blend of vintage country and pre-rock 'n' roll pop, but New Mexico's Handsome Family are no cutesy nostalgia act.''

Bird, who has long been a fan and first covered their track ''Don t Be Scared'' in 2003, toured with the band last fall and was inspired to begin working on this collection. Things are Really Great Here, Sort Of... includes an updated rendition of fan favorite ''Don't Be Scared,'' along with ''Far From Any Road,'' the main title theme song for the HBO series True Detective.

Along with his band, The Hands of Glory (featuring Tift Merritt, Alan Hampton, and Eric Heywood), he recorded the songs in May 2014 and will release them a mere month later. The release follows Bird's 2013 release of the 7 track EP I Want to See Pulaski at Night, and his 2012 release Hands of Glory, which was dubbed to be ''A quiet, careful grower...it blooms into something beautiful'' by NPR, while gaining praise from Rolling Stone, calling Bird a man whose ''emotional urgency energizes his fluid multi-instrumental elocution.''