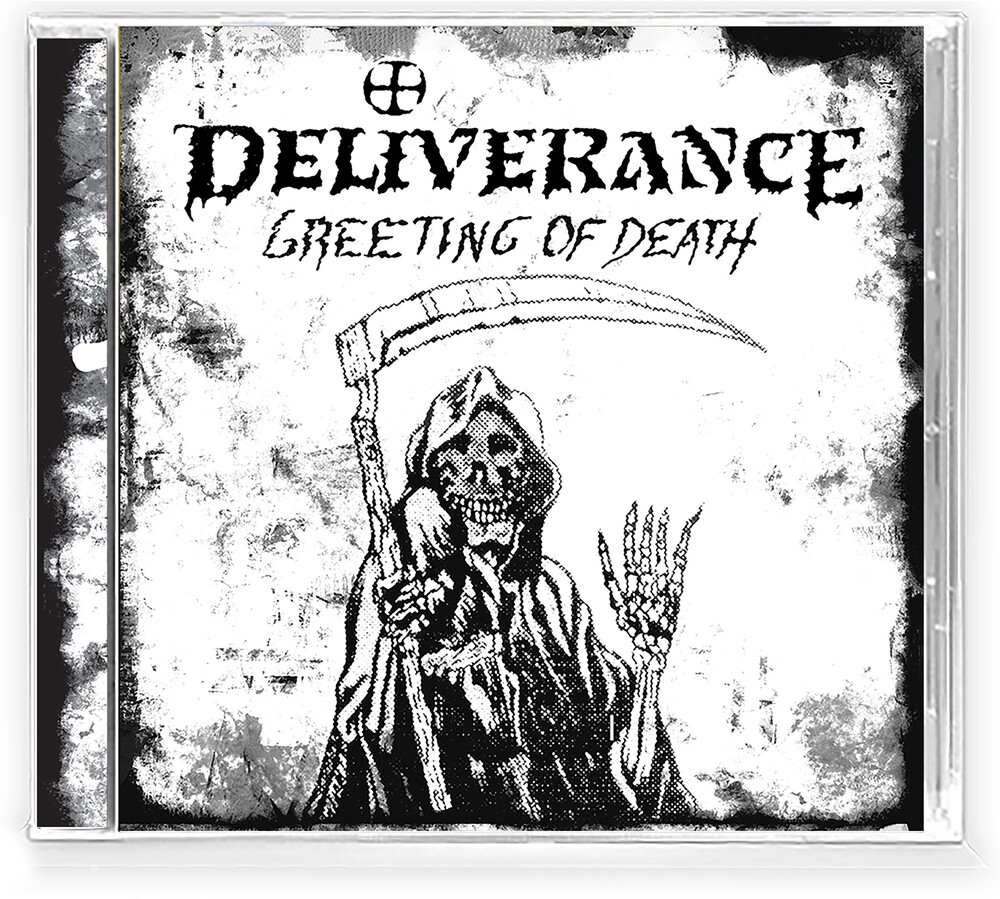 Metallica had No Life Til Leather... an iconic demo that catapulted the band into unforeseen glory and status. Deliverance's Greeting of Death demo (1986) did the same thing for the most heralded Christian thrash act of all-time. Frontman, Jimmy Brown asked his girlfriend to draw up a cover of a Grim Reaper waving "Hi!" Inspired by a Chic Tract he had seen and she drew it, and used rub on letters from a stationary store. Jimmy made all the dubs from a tape deck that belonged to his sister. Three tape decks later, he had ordered 5,000 copies within a year's time. The demo gained a life of it's own! People everywhere knew it! People would sing Speckled Bird (exclusive to this demo) when the band would go to shows and people at the shows were singing along with the songs from the demo! Greeting of Death was a very special moment in time, captured on cellophane magnetic tape and it propelled Deliverance to being a regular at the Sunset Strip and the newly emerging Christian Festival networks. With their roots deeply rooted in the Greeting of Death demo, Deliverance would release two of the most influential and critically acclaimed Christian thrash releases of all time in the 1989 Self-Titled and the 1990 release Weapons of Our Warfare. This 1986 demo, Greeting of Death is what propelled them to impact the thrash scene more than any other single Christian thrash band, ever. All three versions of this iconic demo were intentional in making it look, feel, and sound like the original release featuring the iconic cover drawn by Jimmy's girlfriend, and printed black and white on uncoated (flat/not glossy) paper just like the original demo. The cassette is a single J-Card insert featuring the original six tracks. The CD is a 12 page insert with lyrics and pages of iconic band photos with personal reflections form Jimmy Brown. The 12" Vinyl features the personal reflections, lyrics and rare bands photos on black vinyl (500 units pressed). The CD features the original six songs, plus the two legendary tracks off of the California Metal Compilation, Attack and A Space Called You. This demo came out years ahead of all other Christian thrash releases and opened the door for success for other bands like Vengeance, Believer, and Seventh Angel. The impact of Greeting of Death cannot be overstated, and this reissue gives fans a chance to taste of what the original release was like, but even better with the packaging, various formats, and the 2019 digital remaster from an all new source that is a substantial improvement from all other versions of this release. This is the ultimate Deliverance reissue that celebrates the impact of a band that has a musical legacy second to none. And yes, the album title is Greeting of Death, but the song on the demo is Greetings of Death. That's the way Jimmy's girlfriend heard it when he was telling her what he wanted, and that's the way she made it! Get them while you can - these are treasures!.