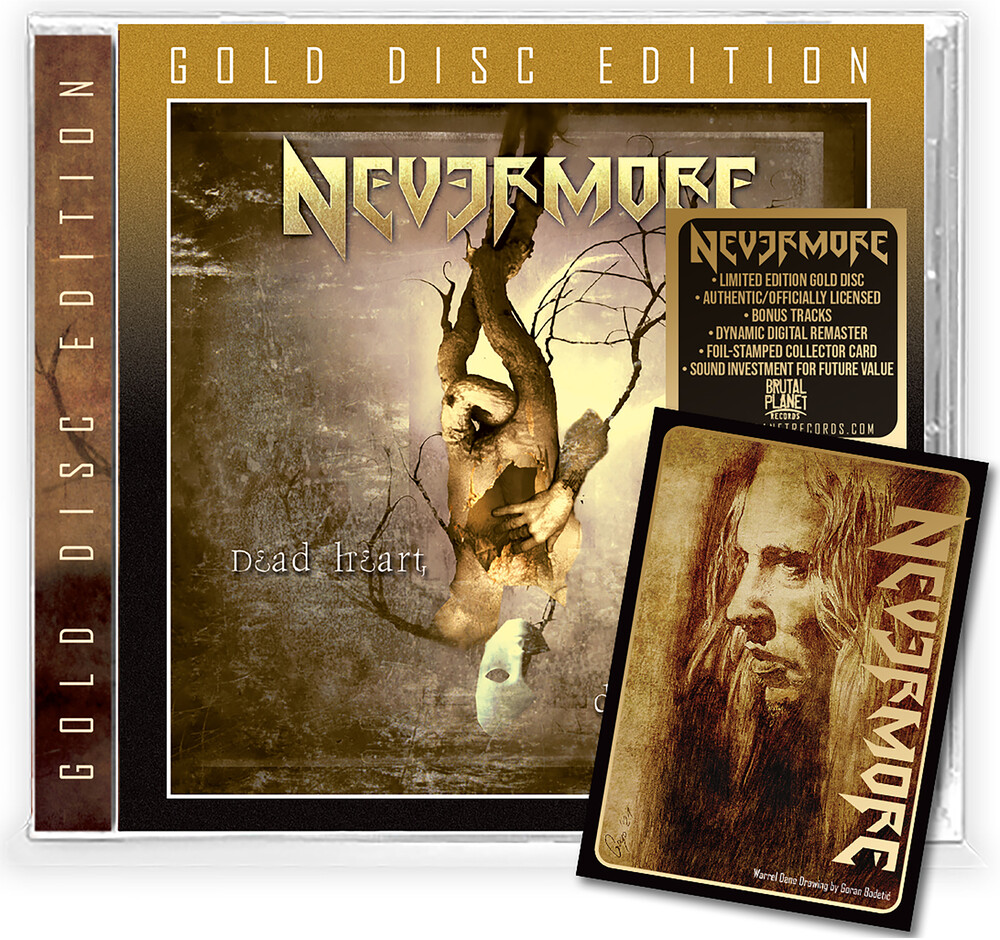 Authentically licensed 2000 classic album released on Century MediaFeatures three hard to find bonus tracks!The legendary Andy Sneap producedWith the coveted Brutal Planet GoldMax Deluxe CD reissue treatmentElite 2022 Remaster by Rob Colwell of Bombworks SoundGold Disc CD to discourage disc rot and add beauty and eleganceEvery CD comes with a deluxe foil-stamped collector's card of NevermoreExpanded 12-page insert with lyrics and additional band picsGold Disc border on the front cover - but the back of the booklet features the front cover with no Gold border around the edgesFeatures vocalist Warrel Dane from the iconic band, Sanctuary!Cover song of Sound of Silence (Simon & Garfunkel)Received a 9 out of 10 rating from Blabbermouth ReviewsBooklet write-up by esteemed heavy metal music critic, Martin Popoff! Dead Heart in a Dead World may have arrived hot on the heels of Dreaming Neon Black, but it did so with some immediately noticeable differences. The opening salvo of "Narcosynthesis" reveals a beefier guitar sound thanks to Jeff Loomis transitioning to the seven-stringed version of the instrument - a move fueled by his longtime love for Meshuggah. Coupled with the Andy Sneap production, the move to the seven-string seemed to finally make audible a sinister heaviness that had always resided latently within the Nevermore sound of old. The album also saw Dane taking on a more diverse vocal approach as he manages to nail powerful ballads like "Evolution 169" and "The Heart Collector" while also savagely laying waste on tracks like "Engines of Hate" and "We Disintegrate." The result of all of these changes was a record that was not only heavier than Nevermore's previous output, but also more immediately accessible. And it couldn't have come at a better time. Dead Heart in a Dead World was released a few weeks before Linkin Park's Hybrid Theory - arguably the height of the mainstream nü metal movement. It's combination of down-tuned, chugging riffs, stratospheric shredding and brutal thrashing served as a bridge between two worlds, equally capable of pleasing casual fans of heavy radio-friendly music and true metalheads alike. A song like "The River Dragon Has Come" seems as if it was specifically designed to lure wide-legged-pants-wearing nü metal punks into the metal underground with it's massive grooves, Dane's dramatic vocals, and one of Loomis' all-time greatest solos, and the band's devastatingly heavy cover of Disturbed's "The Sound of Silence" makes it seem as if the song was always meant to be performed by Nevermore. With Dead Heart, Nevermore not only released one of the very best metal albums of the year 2000, they also created a sound through which they would eventually achieve heavy metal perfection. The stage may be empty now, but each time fans spin this record, they are reminded that even when we feel like we can believe in nothing else, we can believe in Nevermore. The 2022 Brutal Planet Records GoldMax CD remaster includes three hard-to-find bonus tracks (and a foil-stamped Ltd band Collector Card) along with an expanded booklet with lyrics and band pics!