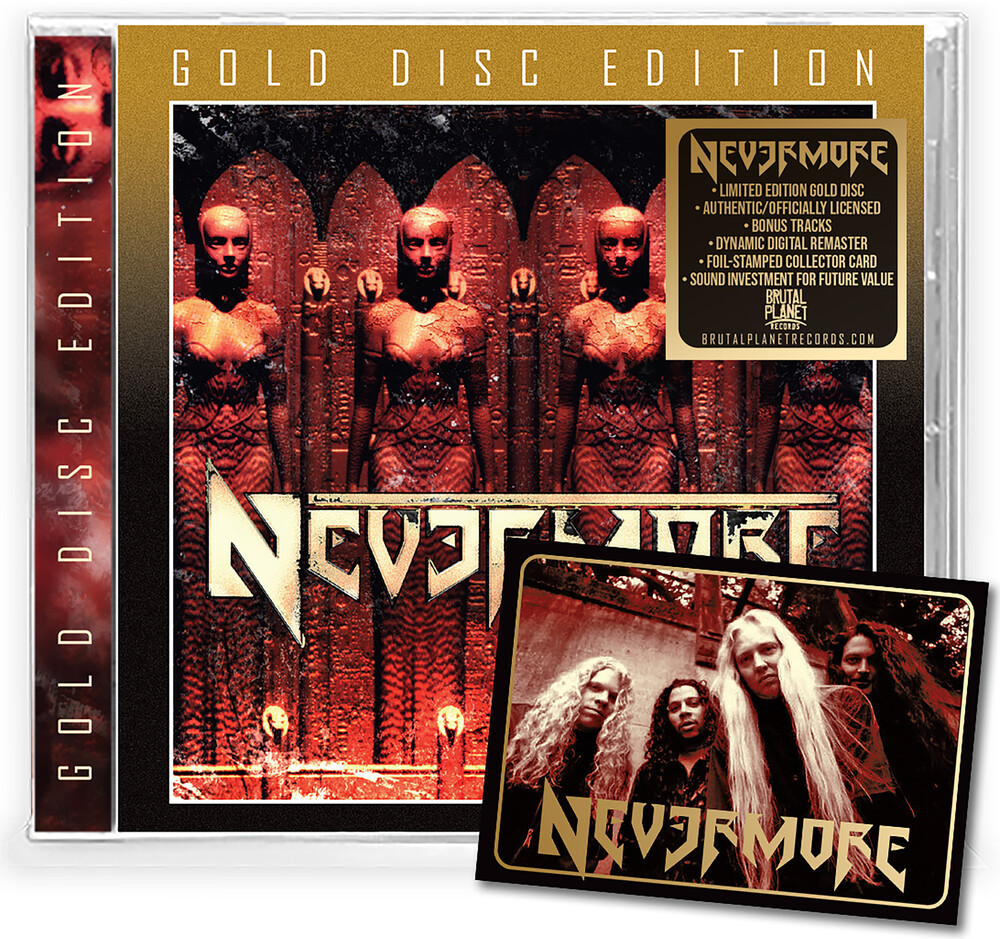 Authentically licensed 1995 classic album released on Century Media5 bonus tracks from the 1992 DemosWith the coveted Brutal Planet GoldMax Deluxe CD reissue treatmentElite 2022 Remaster by Rob Colwell of Bombworks SoundGold Disc CD to discourage disc rot and add beauty and eleganceEvery CD comes with a deluxe foil-stamped collector's card of NevermoreExpanded 12-page insert with lyrics and additional band picsGold Disc border on the front cover - but the back of the booklet features the front cover with no Gold border around the edgesBooklet write-up by esteemed heavy metal music critic, Martin Popoff! Nevermore's first from 1995! If you've heard their later material, this one serves as foreshadowing of their future endeavors. It is an impressive example of how a modern metal band can choose to innovate rather than replicate, a methodology that has allowed Nevermore to stand out from among their peers. The talent of the band members is undeniable. Jeff Loomis is one of the mightiest axemen to hit scene in the last decade and he doesn't hold back here. His riffing isn't as complex here as it would be in the future, but his guitar solos are inspiring. Every solo is original, melodic, and technically challenging, pretty much what a guitar solo should be. Warrell Dane's vocals are refreshing amidst the horrible screamo-oriented singing of pretty much every other band heralded as the "new gods of heavy metal!!" Dane's voice is quite unique, ranging from a haunting low register to a hellish falsetto. Van Williams is one hell of a progressive drummer and his playing is an important aspect to Nevermore's innate heaviness. Jim Sheppard doesn't warrant the attention that the other members generally receive, but his playing is tight and essential to the riffing. You'd be hard pressed to find a more talented group, and this is only their debut album. And the talent continues with top-shelf songwriting. Each song is memorable in it's own right. Many fusing mellower, atmospheric elements to counterpoint the outright heaviness that is generally dominant. Lyrics are intelligent and well-versed, and expertly sung by Dane. They are very memorable! Expect a lot of the riffs to be thrash-influenced, which feels more like Sanctuary than Nevermore. The song structures and lyrics hint at progressive metal foundations, and occasionally there are parts that are reminiscent of power metal. Expect a solid, original, modern metal album worthy of respectable praise from critics and fans a like! The 2022 Brutal Planet Records GoldMax CD remaster includes five hard-to-find bonus tracks (and a foil-stamped Ltd band Collector Card) along with an expanded booklet with lyrics and band pics! Get this limited edition reissue while you can!