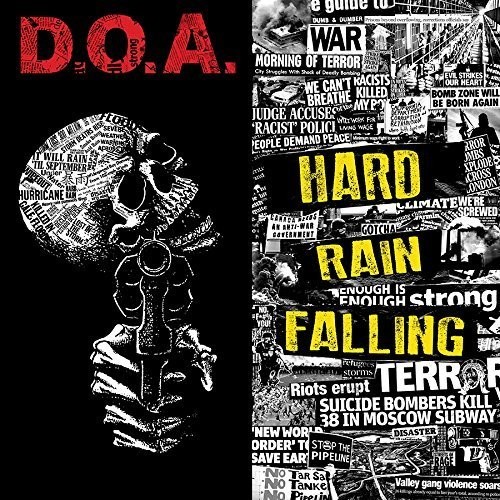 Vinyl LP pressing. 2015 release, the 16th studio album from the Canadian punk legends. DOA is back with a vengeance! It looked like Canada's legendary punk pioneers were going to hang it up, as Joe "Shithead" Keithley, the godfather of hardcore, sought political office in Canada, but that didn't happen this time. So look at it this way, the political world's loss is the music world's gain, because DOA is giving us Hard Rain Falling. When Keithley set out to write the songs for the album, he used DOA's early efforts like Hardcore 81, Something Better Change and War on 45 as a bit of template, in the sense that the songs should be short, fast and right to the point. The end result is great, likely their best album since War on 45. Keithley's lyrics take on a wide range of modern and horrible screw-up's, from racism to street gangs to war to environmental degradation. With all of that in mind, Shithead and his infamous henchmen Paddy Duddy (drums) and Mike Maggot (bass) went into the studio with fire in their bellies and with the goal of making a kick-ass album. It worked-Hard Rain Falling is a great effort from one of the world's most influential and inspirational bands.