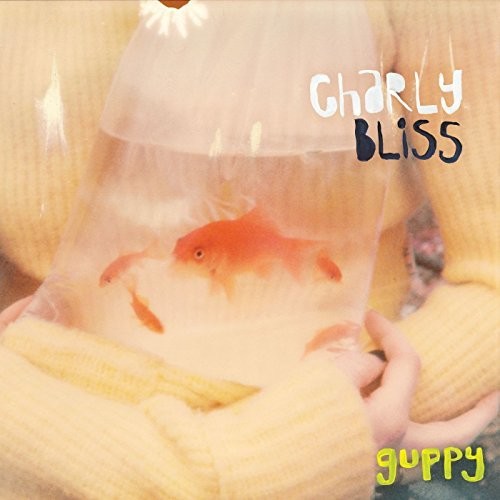 If it's true that listening to just the right record at just the right moment can psychically transport you to some other time and place, then Charly Bliss - an NYC band responsible for having crafted some of the finest guitar-crunched power pop this side of an old Weezer record with a blue cover - can pretty much turn any space into an adult-friendly version of your old teenage bedroom - a candy-scented safe space for extreme fits of happiness and angsty teen-level explosions of romantic ennui.

Though Charly Bliss has been a band for over half a decade, the path that led to their first full-length record, Guppy, has been anything but straightforward. As the story goes, the band officially started when front-woman Eva Hendricks and guitarist Spencer Fox, both just 15, crossed paths at a Tokyo Police Club show in New York City, but the ties within the band go much deeper than that. "It's kind of insane and hilarious," says Eva, "Sam is my older brother, so obviously we've known each other our whole lives, but all of us have been connected to each other since we were little kids. Dan Shure and I dated when we were in our early teens and he and Spencer went to summer camp together. Dan and I broke up years ago, but eventually he'd become our bass player. The reason we all get along so well has to do with the fact we share this ridiculous history. We are all deeply embedded in each other's lives."

After spending years playing shows in and around New York City, the band eventually released an EP (2014's Soft Serve) and scored opening gigs for the likes of Glass Animals, Darwin Deez, Tokyo Police Club, and Sleater-Kinney, as well as a touring spot for their own musical forebears, Veruca Salt.

The ten tracks that make up Guppy, Charly Bliss' sparkling full-length debut, show the band embracing all of their strengths - a combination of ripping guitars and irrepressible pop hooks, all delivered with the hyper-enthusiasm of a middle school cafeteria food fight. That every track is loaded front-to-back with sing/shout-worthy lyrics and ear worm melodies is a testament to the band's commitment to the art form of pop songwriting.