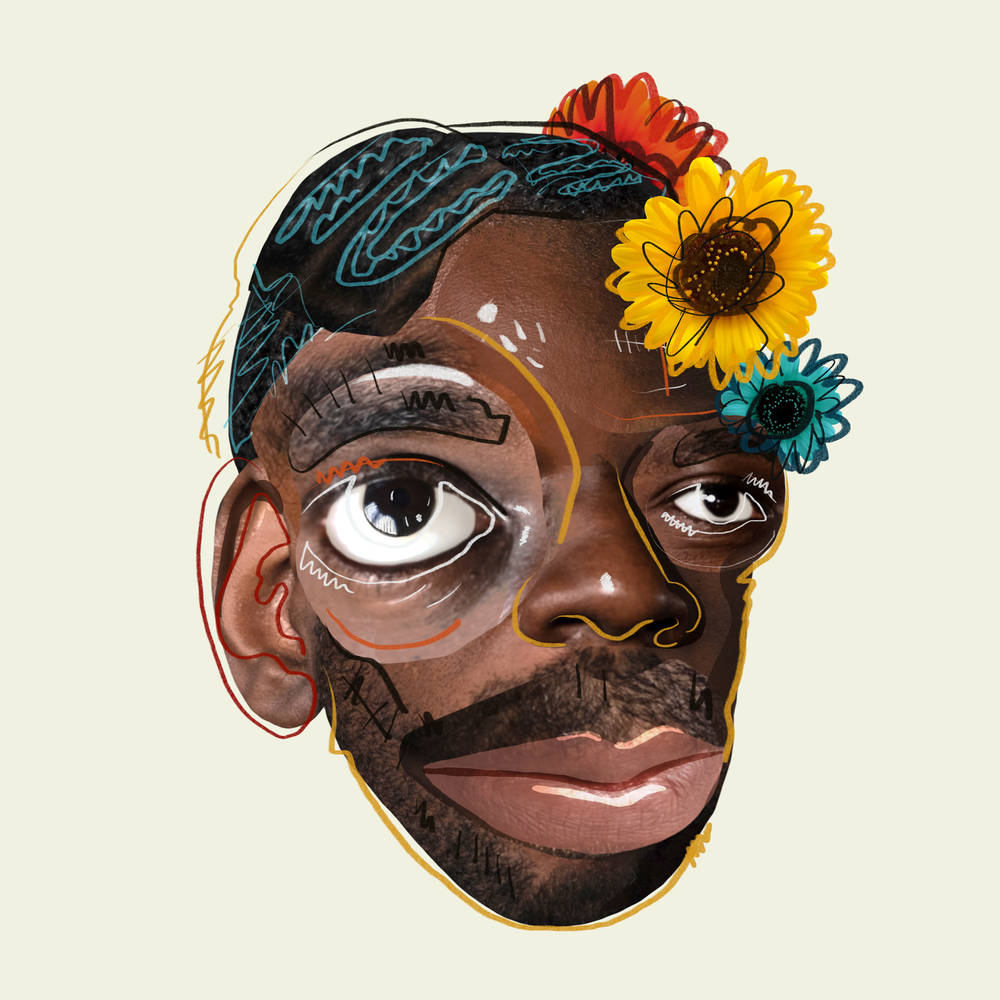 NNAMDĎ has never been able to stay in one place. The Chicago multi-instrumentalist and songwriter set a blistering pace in 2020 with his critically acclaimed genre-fusing LP Brat, a pummeling punk follow-up in the EP Black Plight, and Krazy Karl, a frenetic jazz full-length tribute to Looney Tunes composer Carl Stalling. Add in his role as co-owner of local label Sooper Records, releasing the skittering electronic EP Are You Happy, as well as recent tours with Wilco, Sleater-Kinney, and black midi, and it’s an overwhelming schedule. But his latest album, Please Have A Seat, which is out October 7 via Secretly Canadian, is the result of a much-needed pause. Finally slowing down and welcoming a creative and emotional reset led to his most immediate and accessible effort yet. “I realized I never take time to just sit and take in where I’m at,” says NNAMDĎ. “It’s just nice to not be on ‘Go, Go, Go!’ mode, and reevaluate where I wanted to go musically.” This period of reflection allowed him to take stock of his life and his relationships. He realized the songs he was writing had to mirror his necessary growth. “I wanted to be present,” he says. “Each song stemmed from a place I could think clearly for a second. Each song came from a moment of clarity.” Please Have A Seat serves as an invitation to listen. It’s a request to sit down, be present, and take in a moment. With this quiet introspection, NNAMDĎ found inspiration in silence and nuance.

While making the record, he decided to stretch the limits of his pop songwriting: every track had to be hummable. Though he’s written earworms throughout his career – from playing in bands in Chicago’s DIY community or releasing goofy raps as Nnamdi's Sooper Dooper Secret Side Project –here his shapeshifting hooks are undeniable. Each of the album’s 12 songs, which NNAMDĎ wrote, produced, and performed entirely himself, are relentlessly replayable, careening into unexpected and disorienting places. Shoved up against these potent doses of pop bliss are math-rock freakouts, arena-rock lead guitars, breakneck-paced rap flows, and feverish synth arrangements. It’s a thrilling synthesis that feels like the future. “When I’m writing, I'm into such weird music that I want people to feel unsettled,” he says. “I love pop music and I love writing catchy songs but I also want people to be a little bit uncomfortable too, because that’s just the reality of life.”

Lead single “I Don’t Wanna Be Famous” finds NNAMDĎ taking a birdseye view of his career so far and grappling with what success means. Over a slinking beat, he raps, “I don’t really wanna be famous / I just wanna be on your playlists / Used to say that I was too weird and shit / Now they wanna take me serious.” After over a decade of writing music in Chicago’s underground community, 2020’s Brat earned him notable accolades from NPR, the New Yorker, the Chicago Reader, and the Chicago Tribune, which named him Chicagoan of the Year. “I want to experience all the things that life has to offer,” says NNAMDĎ. “I want to be comfortable. I want to be able to support my family. I want to play these big shows but I also want anonymity and to be able to live quietly.” The song is an attempt to reconcile his ambitions and emotional needs: a constant battle throughout Please Have A Seat.

While the album is full of delectable pop hooks and overwhelmingly catchy arrangements, Please Have A Seat shows every side of NNAMDĎ. “Anti” dives deep into anxiety. He sings over an eerily calming arrangement, “How much more / Same shit / Yeah I heard it all before / And I can’t take much more of this.” “Touchdown” is bouncy and ebullient but the lyrics capture the terrifying feeling of being in a plane hitting turbulence. “The stubbornness and the confidence and anxiety in me are always fighting each other and it shows up in these songs,” he says. Elsewhere, he finds himself stuck in motion on opener “Ready to Run” and reevaluating relationships in “Benched.”

Though the entire record is all NNAMDĎ, he enlists his frequent collaborators Stephan Jurgovan of Nervous Passenger, Sen Morimoto, KAINA, and Brok Mende to provide additional vocals on album highlight “Dedication.” It’s a stunning track that unexpectedly veers from bursts of electronic noise to what’s easily his most immediate pop hooks yet. After swirling synths, NNAMDĎ and company yell, “Something told me I should stay / Things might end up better today / Fight fight fight fight through the pain.” It’s reassuring and palpable catharsis.

Please Have A Seat is a visionary statement and another leap from Chicago’s hardest working musician. “I don't look at things in extremes anymore,” he says. ”Life just happens and you have to kind of pivot and decide how you're gonna take everything. I hope people listening can feel the same things that I felt and can actually sit with something and reflect” NNAMDĎ isn’t concerned about clear-cut answers and obvious solutions. Given the emotional resonance of the project and his otherworldly talents, this album is both an invitation to sit down and take stock of your own listen but also a call to witness an unmatched artist reaching new heights.