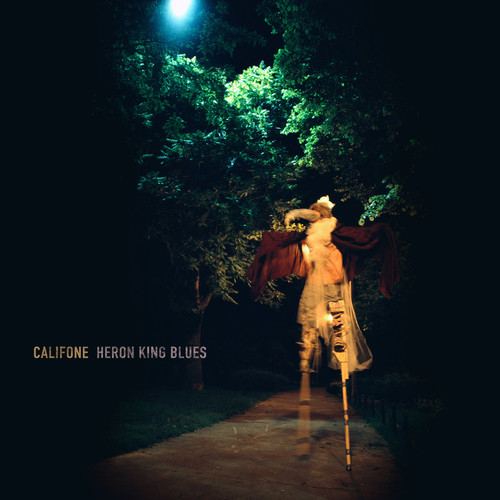 Heron King Blues is about the letting go. Each song its own ceremony. The earth, sun and moon. Wingbones. Shadow maps and dream logic. Stoplights. Meat Trucks. The Father, Son and Holy Ghost. Cocaine. Wild eyed robbers. Hunchbacked derelicts. Broken down angels, Lepers. Gay Lithuanians. Cheaters. Sex. Beggars. Rabid dogs. Sirens. Undertows. Reverse magnetism. Cock fighting. Electric shock therapy. Trick birds. Floods. Ancient Hebrew texts. The Illuminati. Haboobs. Bleach. Expired medicine. Severed tongues. Dragons, Spirit telephones. Bees. Modern Architecture. Electric fences. Dianetics. ESP. Snakes. Poltergeist. Haunted spaces. Crop circles. Demons. Feedback loops. How does one capture lightning in a bottle? You could call me a witness, or better yet an interloper, briefly given the wheel to the mythological ship called Califone. Where others might have attempted to exercise the demons, I chose to let the spirits run wild. We bored under the earth's surface into its core until we reached the belly of the beast. These aren't Songs of Love and Hate. This is no Street Hassle. No Main Street here. This is music that was pulled from the abattoir of Chicago rock, tattered and bruised and barely breathing. This is not music for pussies. - Michael Krassner, August, 2017