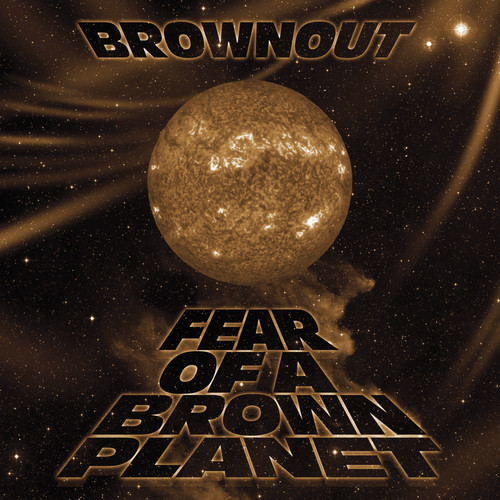 2018 release. Twenty-eight years ago, pissed-off twelve-year-olds around the universe discovered a new planet, a Black Planet. Public Enemy's aggressive, Benihana beats and incendiary lyrics instilled fear among parents and teachers everywhere, even in the border town of Laredo, Texas, home of the future founders of the Latin-Funk-Soul-Breaks super group, Brownout. The band's sixth full-length album Fear of a Brown Planet is a musical manifesto inspired by Public Enemy's music and revolutionary spirit. Chuck D., the Bomb Squad, Flava Flav and the rest of the P.E. posse couldn't possibly have expected that their golden-era hip hop albums would sow the seeds for countless Public Enemy sleeper cells, one that would emerge nearly three decades later in Austin, Texas. Translating sample-based music to a live band turned out to be more of a challenge than they anticipated. Coming off numerous tours as Brown Sabbath and even a stint backing the late legend Prince, Brownout is arguably the tightest and funkiest band on the road today and they're psyched to bring this revolutionary music to the people. For a band without an overt political agenda, they collectively couldn't resist the opportunity to play this music live, especially now.