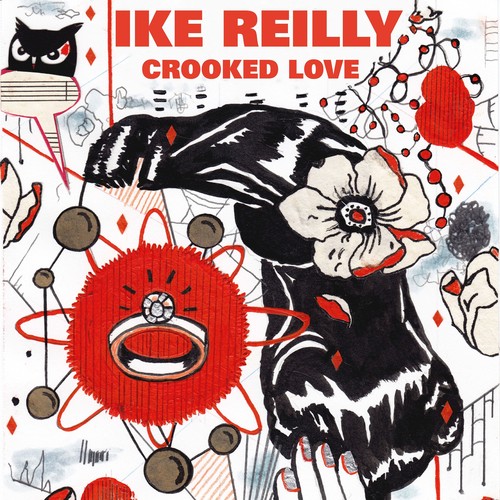 Crooked Love is Ike Reilly’s 8th studio album and was produced by Reilly and his long time collaborator and guitarist Phil Karnats (Secret Machine’s, Tripping Daisy, Polyphonic Spree). Informed by Reilly’s colorful life experiences, his gallows humor and the current political landscape, the songs are poetic, greasy, topical, lustful, self-deprecating and hilarious. Karnats had witnessed Reilly writing and recording demos in hotels, dressing rooms and tour buses and knew he wanted a production that allowed for confident, relaxed takes. In order to provide the most intimate and comfortable environment possible, Reilly and Karnats created a dark, live room vibe with ancient microphones positioned in covert places that allowed the whole band to be in the same space, unencumbered by headphones and isolation booths. The production is decidedly not slick yet the improvisational nature of the playing is sophisticated in its simplicity. And the songs could not have been written by anyone but Reilly. David Carr from The New York Times said, "Ike Reilly is a kind of natural resource, mined from the bedrock of music. All the values that make rock important to people -- storytelling, melody, rage, laughter -- are part and parcel of every Ike Reilly show I have ever seen. One of the best touring acts in the country, Reilly's band takes it as a personal challenge to upend and amaze every room they play in.”