Secrets Of The Rise Of Ultraman | RECORD STORE DAY 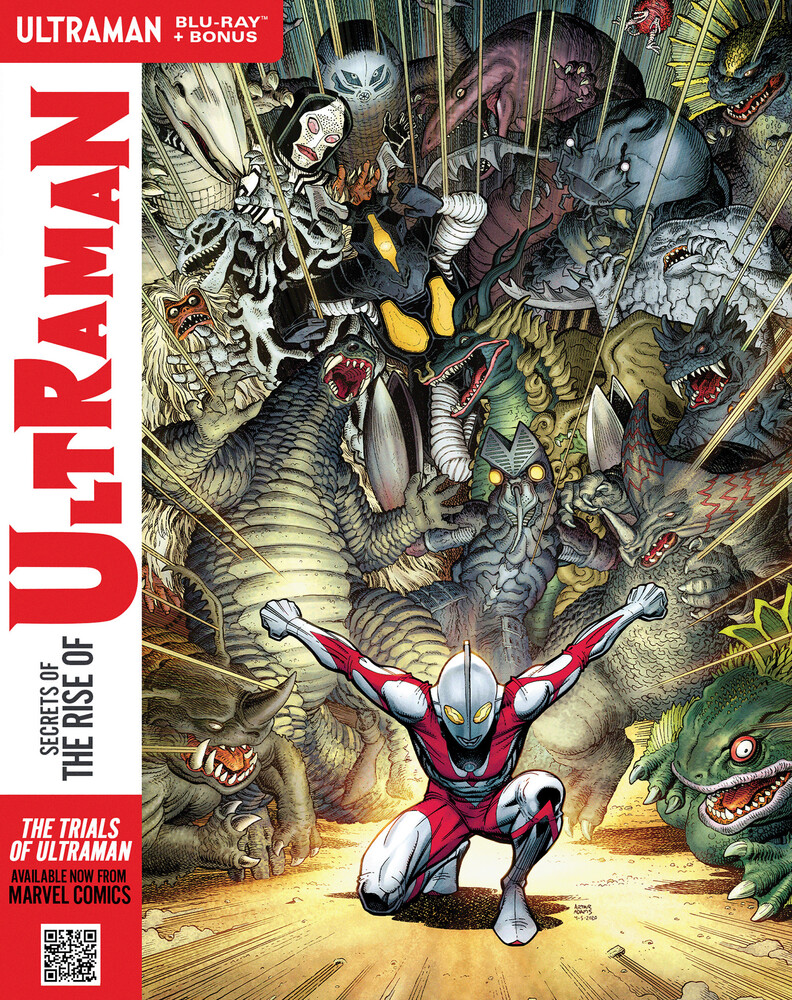 Secrets Of The Rise Of Ultraman
Blu-Ray

Ultraman and the Science Patrol will fight for peace against Kemular, Goldon, Seabozu, Skydon, and more! Included in this exclusive Blu-ray release is a 12-page collectible booklet and episode guide. Enjoy 228 minutes of this classic Sci-Fi/Fantasy with the original broadcast edits that are fully remastered in HD, and available for the first time ever with English dubs in DTS-HD Master Audio.

Secrets of The Rise of Ultraman, a new 5-part bonus feature made in collaboration of Marvel Comics and Starlight Runner Productions. This video series takes place within the vast multiverse of the Ultraman series that explores the exciting connections between the various television series and movies, and the all-new storyline of the comics.

Featuring art created by Arthur Adams on the cover from a collaboration of Marvel Comics and Tsuburaya Production, The Rise of Ultraman Collection will include the following episodes...

Fuji and Hoshino investigate strange sounds and movement coming from the well of Odawara Castle. According to folklore, 500 years ago a famous samurai drove a rampaging monster, Neronga, underground and it remains alive.

Episode 21 - BREACH THE WALL OF SMOKE

The mysterious death of birds near the dormant Mt. Omu may be a prelude to renewed volcanic activity, but when a picnic party reports seeing shining eyes through a sudden fog, the SSSP investigates.

While investigating a series of mysterious bus crashes, Muramatsu and Ide encounter a strange spatial phenomenon. Even though the bus plunges off a cliff, all the passengers are accounted for and escape serious injury.

Episode 29 - CHALLENGE TO THE UNDERGROUND

A subterranean monster at the Otayama gold mines has laid the town of Muro to waste. Captain Muramatsu orders the airlift of the Vellucidar, a new drill-boring tank capable of tunneling underground.

Episode 30 - PHANTOM OF THE SNOW MOUNTAINS

Yuki, a teenage orphan, is vilified by the locals as "Yukinko" (Snow Girl). She vexes hunters by setting free the animals caught in their traps and believes her late mother was a mythical figure in tune with nature.

SSSP Agent Goto returns to Japan after many years in service of the Bolivian branch, but his behavior and questions about the defensive capabilities of SSSP headquarters raise suspicions.

Unleashed from a meteorite, a giant monster of tremendous mass, Skydon, begins to lay waste to the city. The SSSP is ordered to dispatch the beast, but even their most advanced weapons are ineffective.

During patrol of space in a realm designated the "Ultra Zone," Ide and Arashi discover a repository of monsters defeated by Ultraman and dub it the "Monster Graveyard."

The Nippon Astronautics Space Agency has been monitoring their unmanned Prospector Probe on the planetoid designated "Q." Suddenly, the monitors flash with an extremely bright light.

SECRETS OF THE RISE OF ULTRAMAN - BLU-RAY