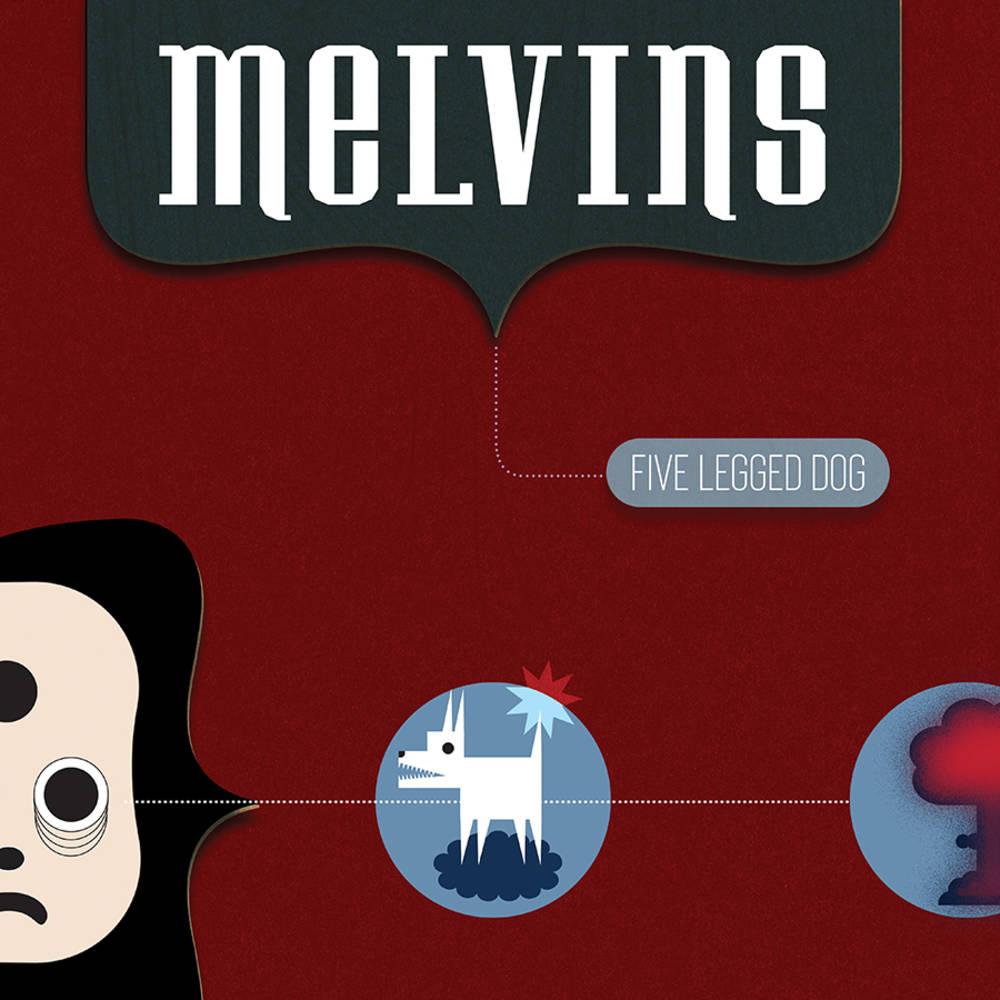 Where to begin with a new Melvins release?

Their latest offering, the acoustic retrospective, Five Legged Dog, finds the Melvins unstuck in time, the musical version of Vonnegut’s Billy Pilgrim, quantum-vaulting between eras and eardrums. At once going forwards and backwards. Is it mere coincidence the album's epicentre should be a rendering of the Stones’ rocker, “Sway,” with conspicuous keystone lyrics, “Did you ever wake up to find / A day that broke up your mind / Destroyed your notion of circular time….”

Five Legged Dog is a four album beast, a testament to their unmatched work ethic, their penchant for pushing the envelope, then shredding it to bits. Said Melvins founder, Buzz Osborne, “One acoustic record seems like a joke and two is pretty normal, but doing FOUR?!? That’s like going to war against an army of gorillas on LSD.”

The Melvins rudder has been their love of other bands, always fans of the good stuff. They were unabashedly Kids In Satan's Service. But not just KISS... The Who, Throbbing Gristle, Butthole Surfers, Blondie, Flipper and the unfathomable bathysphere of electroacoustic noise... Melvins loved those bands the way you love your oxygen. And after all this time, they breathe that music still. The more mordant their cover renditions have been, the deeper the Melvins' sound has plumbed, until all familiars are hidden, then resolved as newly slabbed granite so massive that to dismantle it into its separate sources is unimaginable. Few artists work so hard at exceeding limits, fewer still follow absurdity past all reason and yet, mile upon mile Melvins strike fertile soil of sound and conceptual fury. And with this album Osborne aimed to make a statement. “This a big one. We knew we had to do something massive to prove we weren’t fucking around.”

According to Crover, “These four albums represent a career retrospective.”  Indeed, Five Legged Dog takes a measured sampling of their recorded works, alternating selections from Big Business-era albums, Nude With Boots, The Bride Screamed Murder, (A) Senile Animal, and the tragically under-appreciated Bulls and Bees, and pairing them with ancient pagan favourites Stoner Witch, Honky and Houdini (whose iconic album cover, curiously, depicts a two-headed mutt, no doubt the same rabid bitch that years later spawned this eponymous five-legged dog). Melvins diehards will foam at the 36-song track list which includes “Edgar The Elephant,” “Revolve,” “The Bit,” “Hooch,” “Anaconda,” “Billy Fish,” as well as a no-way-they-can-do-that-acoustically version of “Honey Bucket.”

So here we are. A four-album acoustic retrospective that somehow evades nostalgia. Did you expect, something predictable? This is The Melvins, after-all.