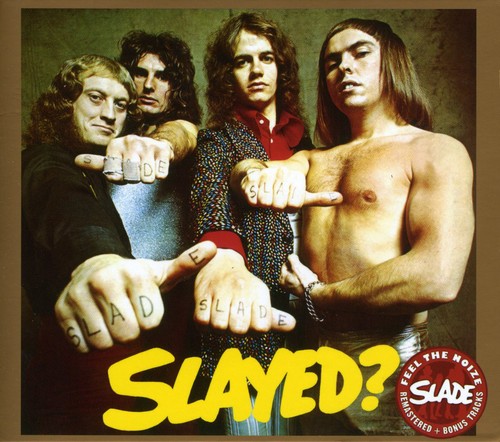 2006 digitally remastered reissue of this 1972 album by the British Glam/Rock superstars featuring five bonus tracks: 'My Life Is Natural', 'Candidate', 'Wonderin' Y', 'Man Who Speeks Evil' and 'Slade Talk to Melanie Readers'. By the time that the 'Slayed?' album arrived in September 1972, Slade had scored their third British No.1 single with 'Mama Weer All Crazee Now', which was included on side two of the LP. 'Slayed?' has been called "music to wreck concert halls to", and it's a description that few familiar with it would choose to refute. Aside from 'Mama Weer All Crazee Now' and 'Gudbuy T'Jane', the latter a No. Two hit in November '72, it was swelled by self-penned nuggets like 'How D'You Ride' and 'The Whole World's Goin' Crazee', plus covers of Janis Joplin's 'Move Over' and 'Let the Good Times Roll' by Shirley Goodman & Leonard Lee, both of which were regulars in their live repertoire. New Musical Express hailed 'Slayed?' as "one of the greatest rock 'n' roll releases ever," and it remains one of the band's best-loved long players. Crank up the volume and go crazee!. Slavo.