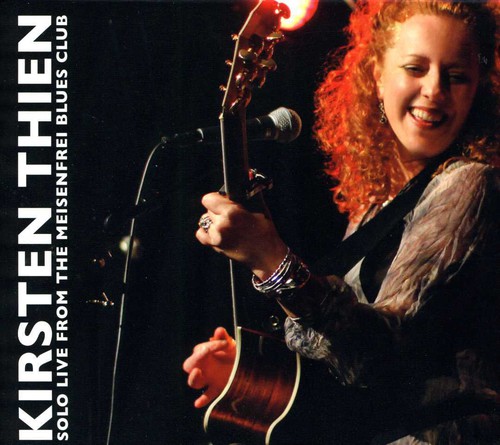 "A snapshot. A moment in time. A work in progress. Alchemy. Intended, not planned. Imperfections I can live with and learn from. Circumstances that brought me here. Love that carried me through. Friendship fostered by music. Music fostered by friendship. A room full of willing souls. These are the elements that make up this record. A snapshot." So writes Kirsten Thien in the liner notes of her new release "Solo Live from the Meisenfrei Blues Club", a journey in song recorded from a single show in Bremen, Germany on October 30, 2012. This record also marks a special place in the journey of a songwriter and touring artist, who, to date, has released three studio albums and toured extensively with her band in the US, and more recently Europe. As part of her 2nd European tour, Thien and her band were booked for a show at one of Germany's premier Blues Clubs, The Meisenfrei. Due to scheduling changes on the tour, the show was set for two weeks after her band would return to the U.S. and there was no chance of rescheduling. So Thien and "The Meis" agreed that she would keep the date as a solo act. After her band's departure, Thien pulled together several solo appearances on The Continent and made her debut in the U.K with the help of a few key fans. On October 30, 2012, she headed to Bremen, Germany for her last show on a five-week European Tour. "I had no idea what to expect. The Meisenfrei is a big club, they're used to loud, hard-rockin' full band concerts. Setting up all by myself on a drizzly Tuesday night was a little unnerving. But when I came back out at show time and the crowd was there, I knew it would be a special night." Thien spent the course of the evening alternately drawing fans in with delicate numbers like the self-penned "You've Got Me" (a soul-drenched song of love from a distance) and stoking the crowd's Blues fire with house-rockin', hip-shakin', hand-clappin' numbers like her smoking version of Bob Dylan's classic "It Takes a Lot to Laugh, It Takes a Train to Cry". Unbeknownst to Kirsten, The Meisenfrei's soundman was recording the show. "When Ronnie [Meisenfrei's sound man] handed me a stereo mix at the end of the night, I was elated just to have a souvenir of what was a very fun and pivotal show for me. Board recordings seldom do justice to your memory of the show, so I didn't listen to the recording until a couple weeks after I got home. My excitement grew as I listened down to the two sets. I felt that I was right back in the room, and that Ronnie had captured this moment in time that already had a special place in my heart and mind." Thien and her post-production team (Erik Boyd, Producer; Dan Myers, Mixing; Scott Hull, Mastering) set out to harness the energy and continuity of the live show with the most intimate and raucous elements from two sets distilled onto a single CD. "Solo Live from the Meisenfrei Blues Club" is 16 stellar songs plus improvised song introductions and banter, for 70 minutes of hold-nothing-back vocal delivery, pulsing guitar-accompaniment, and heartfelt crowd interaction. It is designed to be enjoyed in it's entirety, even while each song also stands on it's own. Thien's solo arrangements of her originals and choice cover provide several surprising gems that play out interestingly in contrast to the original studio versions.