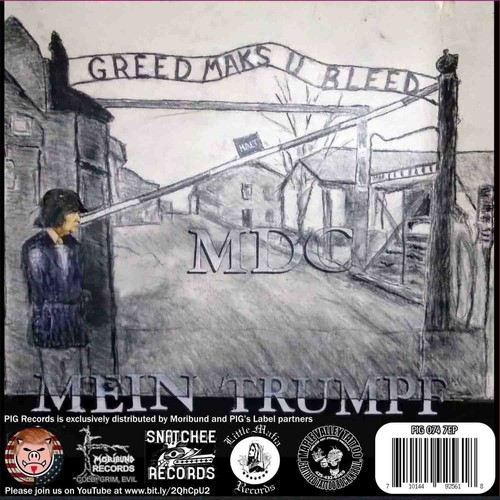 MDC = FOUR DECADES OF INTERNATIONAL PUNK ROCK!!! Forty Years ago today this radical Texas twist begun it's eternal march to play every stage in the punk rock world and they've since damn near duplicated that task many times over. North America, South America, Australia, Africa, Asia, Europe and...(oh no, they missed Antarctica.) That's right, Millions of Dead Cops have been around for forty years and have performed in six out of seven continents. Sounds like a cereal commercial when in fact it is a serious question. "What the Trump is going on?" Sit back and let MDC answer that question. MEIN TRUMPF! From the perspective of the 99 Percenters. RIOT COP = WON't STAND IDLE AT YOUR FETTERED GATES! Police riot shooting peppered rounds all over the people. A female cop leads the charge. Activists are given no escape as police randomly beat the crowd with steel weighted batons. At this point you will see front man Alex Lilly on the front lines with a camera and thoughts of songs and paintings brewing in his peppered beaten mind. What would Little Alex change if he could? "It's not a question of change, it's a question of resistance," so says the musician and painter. His band, Riot Cop, deliver piercing raw sounds with unique representations often performed live at Alex's gallery. Very unique with a very hardcore approach to standing up for what he believes in.