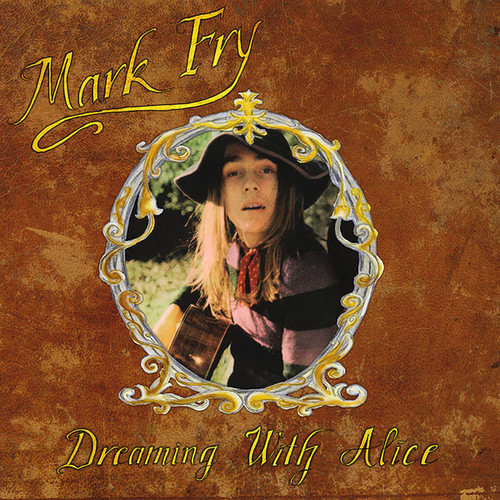 LP version. Merlins Nose Records present a reissue of Mark Fry's Dreaming With Alice, originally released in 1972. Dreaming With Alice was already an obscurity by the time of it's release. Recorded by a 19 year old Mark Fry for an Italian sub label of RCA, it presented a beautifully naive kind of psychedelic folk similar to what the Incredible String Band laid down at the same time just a bit more straight forwarded. Young Mark enchants his listeners with dreamy vocal melodies of utter beauty which create an outmost peaceful atmosphere. The picturesque tunes take the listener on a trip out to the English countryside, on a gentle and warm spring morning, and into a fairytale world. You might get lost within this colorful dream and not be willing to return to grey reality anymore, but this music burns as the flame of love within your heart. The direction, despite all psychedelic elements, is definitely determined by British folk music of the '60s and '70s. One charmingly odd aspect of the album is that the title track has been split up over the whole album as short sections flanking the longer tunes. Mark Fry plays his acid folk from the bottom of his soul without thinking about satisfying the demands of the mainstream audience. Dreaming With Alice is intriguing, keen, and absolutely one of a kind, with a mood changing from rainy days to sunny mornings out in the meadows. Original copies in good condition go for about 1600 Euros, so a reissue is welcome among fans of totally psyched-out music, with mostly acoustic instrumentation and vocals. A must have for all fans of acid folk from the late '60s to the early '70s era. RIYL: Perry Leopold, Incredible String Band, Steeleye Span, Woods Band, Pentangle.