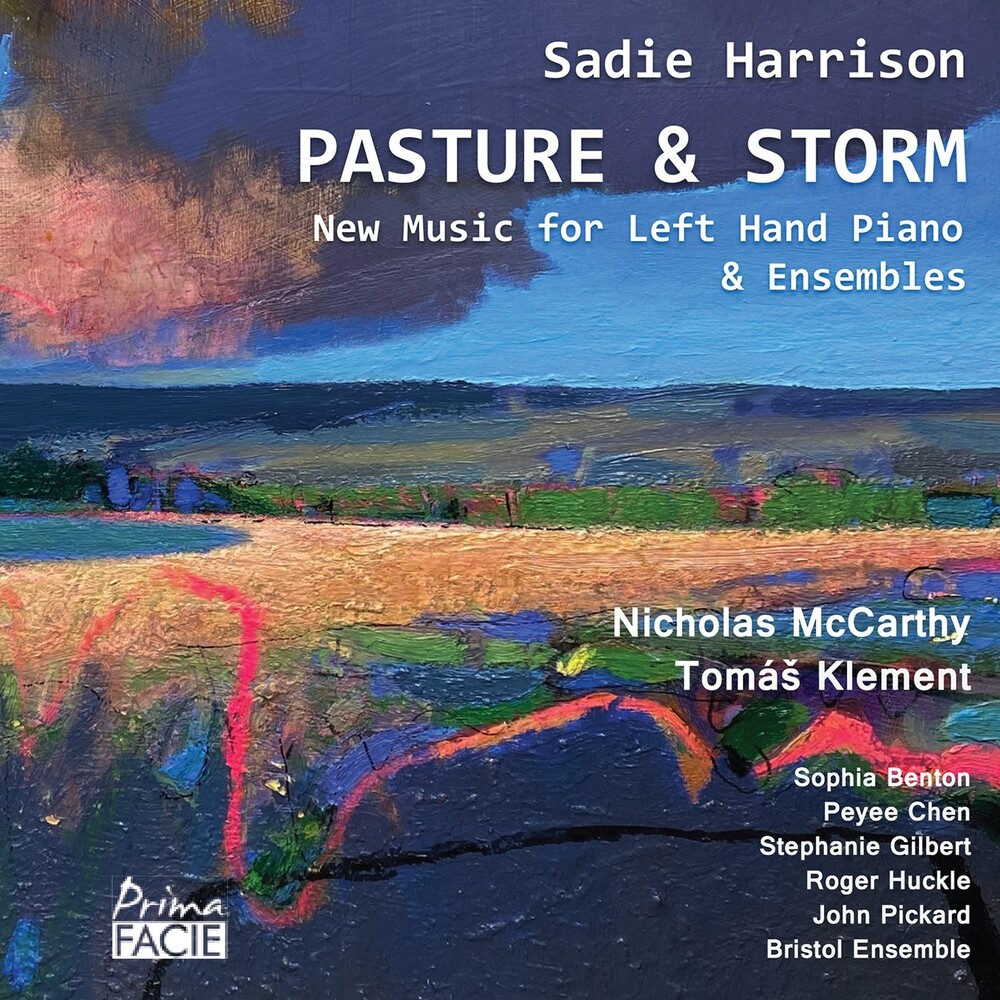 The piano's world encompasses glass-nerved virtuosi and stomping barrel-housers in fedoras; it is a world of pasture and storm, of perfumed smoke, of liquid mathematics. " (Kenneth Raymond Miller, cell biologist). The Pasture & Storm Project brings together the composer Sadie Harrison, three pianists in Nicholas McCarthy, Sophia Benton and Tomas Klement, the singer Peyee Chen, flautist Stephanie Gilbert, violinist Roger Huckle, and the Bristol Ensemble, conducted by John Pickard. The CD includes 8 new works written to celebrate the unique talents of the left-hand-only pianist. The project came about initially through Sadie's teaching the young pianist Sophia Benton. In Sadie's' own words: "When I embarked on the Pasture & Storm Project (New Repertoire for the Left-Hand Alone Pianist) in early 2020, I could not have envisaged how the world would have changed by the time it was completed in Autumn 2022. The storms of the pandemic and the fall of Afghanistan to the Taliban resonated around the world and there is no doubt that the creative trajectory of Pasture & Storm was driven in great part by the consequences of these two overwhelming global events. A UK-based project unexpectedly became a collaboration between musicians and artists across the world, celebrating diversity in all it's colours and splendour. The seeds for Pasture & Storm were sown back in 2017, when the young pianist Sophia Benton came for lessons. At school Sophia suffered a netball injury which led to Complex Regional Pain Syndrome, eventually leaving her unable to use her right hand. Despite the richness of mid-twentieth century repertoire, we found ourselves having to adapt pieces to broaden her stylistic horizons for conservatoire auditions. (She was subsequently accepted by the Royal Welsh College of Music and Drama. ) Extraordinarily, a few weeks after meeting Sophia, I met two amateur pianists at my local gym, both rehabilitating after having right side affecting strokes, distressed at no longer being able to play. It was a great joy to gift them some small pieces, these eventually becoming part of Pasture & Storm. Of course, a project like this had to involve the inspirational, virtuoso, disabled pianist Nicholas McCarthy, described as ' a champion of the dynamic and brave world of left-hand alone repertoire'. Although there is a great deal of single hand solo piano music, we both felt that there was a definite lack of chamber music involving disabled pianists. "