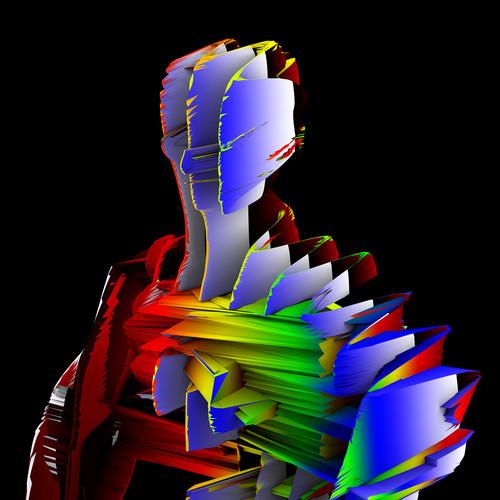 Visible Cloaks’ Lex proposes a utopian dream language and its accompanying sound, a limitless, delicate space developed by fluid musical techniques and subconscious voices. The six pieces comprising Lex simulate a more peaceful future, their mysteries telling a new tale in an unknown but imaginable melodic language. Visible Cloaks are the Portland-based musicians Spencer Doran and Ryan Carlile. Utilizing software-based composition rooted in randomization, MIDItranslation and chance operations, the duo has established an improbable humanist mode of music from esoteric processes. Following their self-titled debut album, Visible Cloaks offered Reassemblage, an album simultaneously honoring the post-Yellow Magic Orchestra school of avant musical adventure and diverging from it. Veering from the paths cleared by Japanese and Italian electronic pop and ambient artists of the mid-80s / early- 90s, Reassemblage established Visible Cloaks’ own camp in a forest of deep sound canopied by trees grown from synthetic seeds. The sound represented on Lex is webbed with sculptural arrangements and interpolated by the sounds of alien speech. These strange and serene utterances were created by Doran feeding a chain of multiple dialects and accents through a language translation software to create an auditory poetry of an evolved place and time. Lex features both the final version of this process and earlier, simplified experiments with it (“Keys”). “The idea – building on ‘fourth world’ or ‘global village’ type concepts – was to create a projected language that was a fusion of many,” Doran explains. “The result was a very disorienting form of non-language that amplifies the lapses in meaning that occur with the inaccuracy of auto-translation software.” Permutate Lex, a companion short film to Lex made by Visible Cloaks in collaboration with artist Brenna Murphy (who also created the artwork for Reassemblage and several virtualist videos for the album), is an integral counterpart, both visualizing an aesthetic alive with human form and guiding the sonic experience of the first five pieces: “Wheel,” “Frame,” “Transient,” “Keys,” and title track “Lex.” “World,” the longest piece presented on Lex, is redrawn from a generative composition originally produced for an installation Doran made with Murphy. The original work incorporates LFOs and randomized MIDI-information, and was intended to variate indefinitely. In this ‘fixed’ version, “World” provides a more conclusive view into the impossible musical environments Visible Cloaks make real. Longer than any track on Reassemblage, “World” expresses the deepening, patient intimations suggested by Lex. Doran says the Lex “attempts to communicate the essence of a world distant enough that it can’t be captured or comprehended from the present, appearing only surreal and inscrutable.” The statement reveals a broader musical philosophy fueling this new moment; an awakened voice woven through complex melodic shapes and phrases establishes communication between listeners and the unknown, here presented by Visible Cloaks as sounds coloring the very edge of the envisionable. Visible Cloaks’ Lex is available December 8 in LP and digital formats. An exclusive CD version of Lex featuring the audio of Permutate Lex will be available around Visible Cloaks Japanese November / December 2017 tour with Sugai Ken.