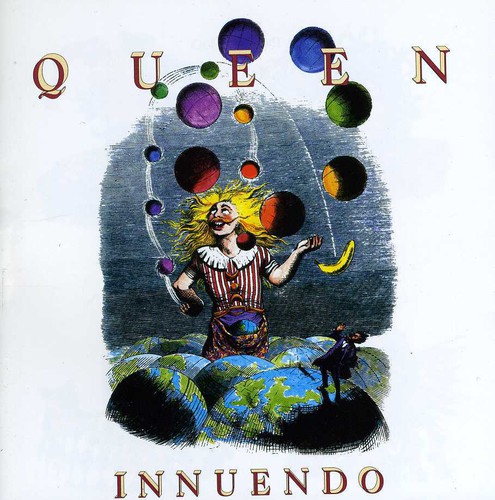 Freddy Mercury's last studio album and one of the band's best.

''Innuendo'', released in 1991, is Queen's thirteenth studio album and the last to be composed entirely of new material. It is also the final studio album to be released while lead singer Freddie Mercury was still alive. The album was praised by critics and fans as one of the strongest albums of Queen's later career. It reached number one on the UK album charts (2 weeks) as well as in the Netherlands (4 weeks), in Switzerland (8 weeks), Germany (6 weeks), and Italy (3 weeks). The album was released in the United States one day after it was released in Britain. The album would be the first Queen album to go Gold in the US upon its release since ''The Works'' in 1984. It peaked at number 30 in the United States.

The album was recorded during 1990 - in August of that year Mercury's HIV was diagnosed as having developed into full blown AIDS, although he was keeping his illness a secret and denied countless media reports that he was seriously ill. The band and producers were aiming for a November or December release date in order to catch the crucial Christmas market, but Mercury's declining health meant that the release of the album did not take place until January 1991. Mercury died 10 months later.

Much of the material on the album deals with the band's coming to terms with his imminent death. The theme is also reflected in the music, which can be heavy and arresting ("Innuendo" and "Headlong"), but also bleak and dark ("The Show Must Go On","These Are The Days Of Our Lives","I'm Going Slightly Mad" and "Don't Try So Hard"), and very often both ("The Hitman" and "Bijou"). Stylistically, ''Innuendo'' is in some sense a return to Queen's roots with its harder rock sound ("Headlong", "Ride the Wild Wind"), strong vocals from Freddie ranging over four octaves, overdubs, multipart composition (the title track), and psychedelic effects ("I'm Going Slightly Mad").

The album cover was designed by Queen and Richard Gray. The booklets and single covers from the album are by Grandville, or are inspired by his illustrations. - Wikipedia