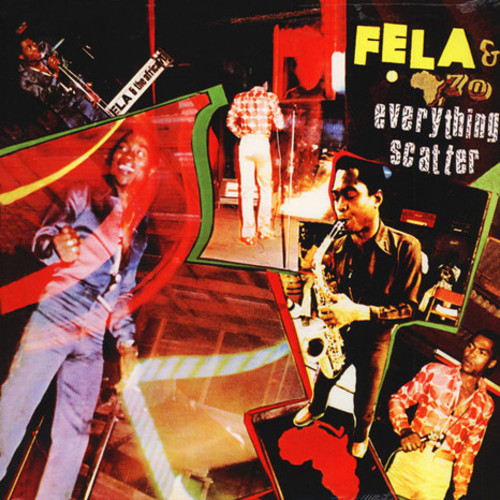 Everything Scatter, originally released in 1975, is one of several masterpieces from early in Fela’s mid-1970s purple period. In three extraordinarily productive years, Fela released 23 albums of new material (or perhaps 25 such albums, for the historical records are imprecise). The purple period continued up to and immediately beyond the Nigerian army attack of 18 February 1977 which destroyed Fela’s self-governing commune, Kalakuta Republic. By the time Everything Scatter was recorded, Fela had put all Afrobeat’s key elements in place: the signature rhythms he had developed with drummer Tony Allen; edgy, jousting tenor and rhythm guitars; call and response vocals; fat horn arrangements and extended, jazz-based horn and keyboard solos; politically confrontational lyrics; and, crucially, the Broken English Fela adopted to take his message beyond Yoruba speakers.