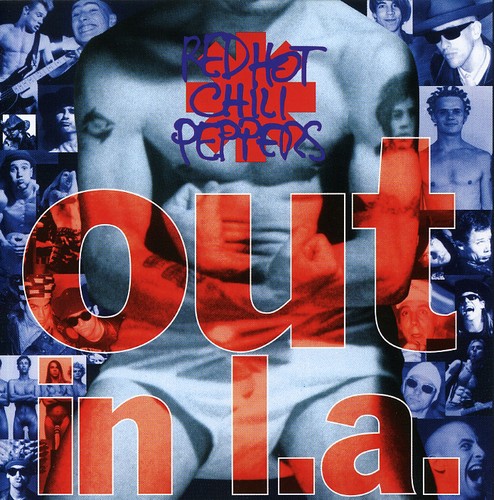 Long out of print in the U.S.! Out in L.A. is a virtual alternate audio history of the band, focusing on non-album tracks and remixed and alternate versions of tracks not normally included on RHCP compilations. For starters, six of the songs are unavailable on any of their albums in any form ('Blues for Meister', 'You Always Sing the Same', 'Stranded', 'Flea Fly', 'What It Is' and the seasonal favorite 'Deck the Halls'). Also featured are remixes of 'Higher Ground', 'Hollywood Africa', 'If You Want Me to Stay' and 'Behind the Sun', plus live versions of 'Castles Made of Sand', 'Special Secret Song Inside', and 'F.U.'. This CD even contains demo versions of 'Get Up And Jump', 'Out in LA' and 'Police Helicopter' amongst others! a treasure trove of RHCP gems at your fingertips! EMI.

''Out in L.A.'' is a compilation of rare tracks by the Red Hot Chili Peppers released November 1, 1994 on EMI. The tracks contained are varied with the inclusion of four remixes, live cover songs by Jimi Hendrix and Thelonious Monk ("F.U." is a joke lyric over the melody of "Bemsha Swing"), demos and joke songs.

These recordings are the first the band made and are described in Anthony Kiedis' autobiography ''Scar Tissue'' as being the most prolific sessions the band ever had. Four of these songs were recorded with Jack Sherman and Cliff Martinez on the band's first album. However, these early versions are said to be the preferred ones as they capture the original vibe intended. Hillel Slovak's and Jack Irons's playing are instrumental to this. Many of these tracks were included in the remastered versions of the band's first two albums. However, "You Always Sing the Same" (track 15) was already on their debut album. - Wikipedia