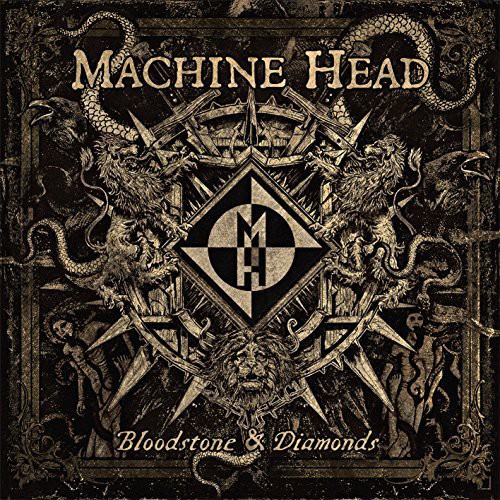 It's been three years since Machine Head released Unto the Locust, widely considered the mainstream metal album of 2011. That was no small feat: four years later it was followed by The Blackening, which is arguably regarded as their magnum opus. Bloodstone & Diamonds is the first MH offering without founding bassist Adam Duce; he has been replaced by former Sanctity guitarist Jared MacEachern. In keeping with the restless musical vision of MH, this set is wildly ambitious. Produced by frontman and guitarist Robb Flynn with Juan Urteaga, and mixed by Colin Richardson, it clocks in at over 70 minutes through 12 tracks. Bloodstone & Diamonds is, thankfully, bone-crunching in numerous places, but its depth and breadth are considerable, its dark, sometimes menacing vibe crosses the divergent paths of its predecessors, yet is in keeping with their signature sound. There are loads of thrash and killer hard rock, though not as much groove metal as some longtime fans might like. Opener "And Now We Die," with its layered soundscape intro and woven strings, clocks moves through phases that combine all three of these dynamics. First single "Killers and Kings," with its unrelenting crack and roar, has a hooky, chanted chorus and a walloping thrash riff that drive it. "Night of the Long Knives," a narrative about the Manson murders, is one of the ugliest tracks MH has ever cut. The twin leads, reverbed drums, and slamming bassline/guitar vamp are careening death metal. The gorgeous Tibetan-style monastic chant that introduces "Sail Into the Black" belies a simple modal melody with droning, fingerpicked, acoustic guitars, sparse pianos, and strings, for four minutes before the punishing big noise takes over for its final half. "Beneath the Silt," with its growled and clean lead vocals, is heavy on the groove, while "Gamer Over" is overdriven hard rock with an excellent vocal. Between them is the startling "In Comes the Flood," with a chamber string intro and a female backing chorale singing "America the Beautiful," with symphonic metal interludes and blasting drums. It eventually becomes a huge cinematic elegy. The set closes with the martial death metal anthem that is the raging "Take Me Through the Fire." Given its range, variety, and length, Bloodstone & Diamonds is a labyrinthine musical and atmospheric journey full of textural and dynamic twists and turns. At times it's even exhausting. That's hardly a bad thing. Given how closely woven these tracks are, the album requires attention -- and numerous listenings -- to fully appreciate what is on offer. Here Machine Head take one sonic attack and push toward and through the boundaries of another. This set is a major go; it extends the qualitative trajectory of The Blackening and Unto the Locust.