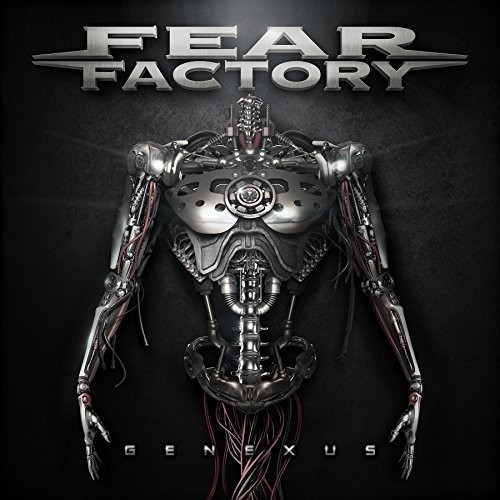 It’s classic Fear Factory sound, the sound that fans have always expected, but I think because we are taking our time, the songs are really well crafted…without losing the edge or the angst, without losing the essence of Fear Factory.” – Burton C Bell (vocalist) Recorded in part at NRG Studios in North Hollywood, CA with longtime collaborator Rhys Fulber (Frontline Assembly, Delerium) and Mike Plotnikoff (Red, Kelly Clarkson), Fear Factory’s 9th studio albumis entitled “Genexus”. Mixed by the legendary Andy Sneap), “Genexus” is the band’s debut on Nuclear Blast Entertainment and a powerful return to form for one of the originators of “cyber-metal”. Fear Factory’s previous release, 2012’s “The Industrialist”, sold over 9,000 copies in the first week of release in the USA and debuted at #38 on the Billboard Top 200.

The word GENEXUS is a hybrid of two words; GENESIS and NEXUS. This word describes the next transition in human evolution as man moves forward to a “mechanical” state of being. Ray Kurzweil predicts that the SINGULARITY will occur around 2045. Genexus is the term for that next evolutionary process. Where humans are machines, machines are human, and the differences are oblivious to the naked eye.

This album is a record of thought patterns, psychology and struggles of the Genexus generation. The cognitive machine has arrived, and it wants autonomy from the industry that created it. This machine struggles, like every other human has throughout the course of history. This is the story of every one of us.