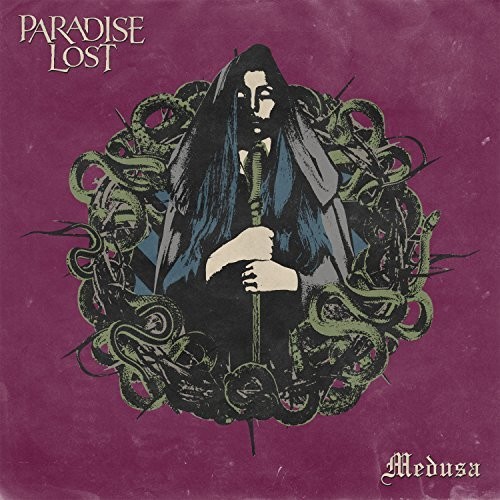 Most people will know Medusa as the Gorgon from Greek mythology; she is the infamous beast with venomous snakes for hair who will turn anyone that dares to look into her eyes to stone. It is this hideous creature who Paradise Lost have chosen to be the figureheard for their 15th studio album, as, from a philosophical perspective, she is more than simply a monster. Singer Nick Holmes started his research, intrigued to find greater meaning behind the symbol of Medusa and became particularly fascinated by the Gorgon's nihilistic connotations. Attempts to avoid looking into her eyes represent avoiding the ostensibly depressing reality that the universe is meaningless, is an idea that was adopted by American novelist Jack London, and a thought that could have easily emerged from the band's's lyrics over the past three decades. Medusa serves as Paradise Lost's heaviest full-length release of the past 15 years, melding crushing doom metal with Holmes' harsh death growls and raw organic sounds, heralding a new era of pure Northern misery. Recorded at Orgone Studios, in the misty countryside of Woburn, with producer Jaime Gomez Arellano (Ghost, Ulver, Catheral), a truly brutal beast of an album has been born. It not only expands Paradise Lost's musical boundaries, but also unveils the band's darkest thoughts.