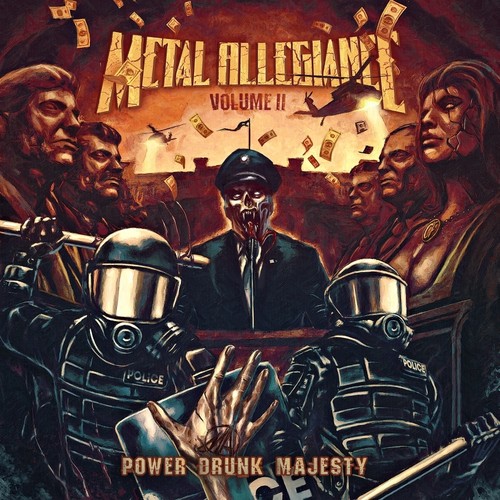 2018 release. It began as a celebration of heavy metal, powered by the almost tribal bond shared between the extreme music community's most revered trailblazers, armed with a list of contributors onstage (and off) that read like a Wikipedia entry on the genre itself. Now, with their second album, Metal Allegiance achieves the seemingly impossible once again. Beyond any doubt, the all-star "project" has cemented it's position as a true band. An adrenaline-soaked, thrash-worshipping, groove-driven, diverse, yet more sharply focused effort than it's no-less-impressive predecessor, the mere existence and urgent brilliance of Volume II: Power Drunk Majesty silences any doubt as to the band's earnest intention, purposeful resolve, and resilient dedication to all things heavy metal. Emerging from prolific writing/jamming sessions with two different configurations of the group's four cofounders, with nine guest vocalists across ten tracks, Volume II: Power Drunk Majesty boasts new Metal Allegiance anthems like 'Bound By Silence,' 'Liars & Thieves,' 'Mother Of Sin,' and 'The Accuser,' alongside the esoteric mood of 'Voodoo Of The Godsend' and expansive album closer 'Power Drunk Majesty (Part II).'