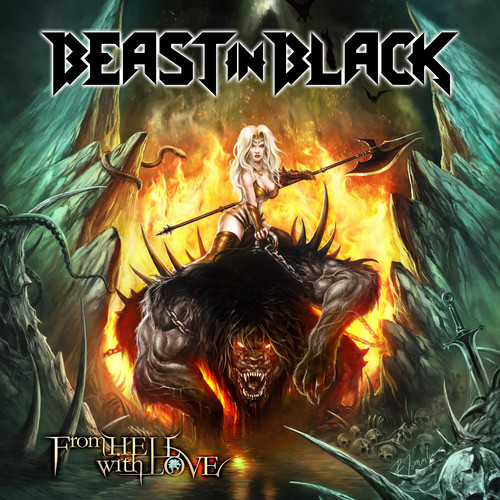 “The BEAST is back, the BEAST IN BLACK!” Haunting words recalling “Berserker”, BEAST IN BLACK’s debut album, which was finally released in November 2017. Although it never actually felt as if theBEAST had been away entirely. Right after the departure from his former band BATTLE BEAST, BEAST IN BLACK’s founder Anton Kabanen recruited new companions in the way of high-pitched vocalistYannis Papadopoulos (WARDRUM), bassist Mate Molnar (WISDOM), guitarist Kasperi Heikkinen (U.D.O.) and last but not least drummer Atte Palokangas (THUNDERSTONE), who officially replacedSami Hänninen in early 2018.

“Berserker” not only allowed BEAST IN BLACK to enter the hearts of many people all around the globe, but also gave them the keys to the gates of the world’s stages! The accompanying touring cycle kicked off in October 2017 in the form of a few European shows supporting the legendary W.A.S.P. followed by select shows opening for Germany’s BEYOND THE BLACK. The BEAST started 2018 with two sold out headlining gigs in Finland, the home country of Anton, Kasperi and Atte. But there was no rest for the wicked, as the group joined Italian symphonic metallers RHAPSODY Reunion on their extensive “20th Anniversay Farewell Tour” across Europe, where the band visited a number of countries and cities for the first time ever. The summer saw BEAST IN BLACK playing several festival gigs, many of which were in Finland. To worthily close the “Berserker” live chapter, the band returned to where their live career had begun back in 2015 - supporting Finnish symphonic metal giants NIGHTWISH in front of several thousand fans in November & December 2018.

The band secretly forged 11 new tracks which comprise their highly-anticipated sophomore record “From Hell With Love”. The album was once again recorded in Anton’s own Sound Request Studio, and true to the motto “Never change a winning team”, the cover artwork was created by Roman Ismailov who worked on “Berserker”. Although BEAST IN BLACK’s new tunes musically fit into a similar vein as their debut album, the lyrics haven’t only been inspired by the aforementioned “Berserk”, but also by other movies and TV series Anton is a huge fan of, as well as personal experiences once again