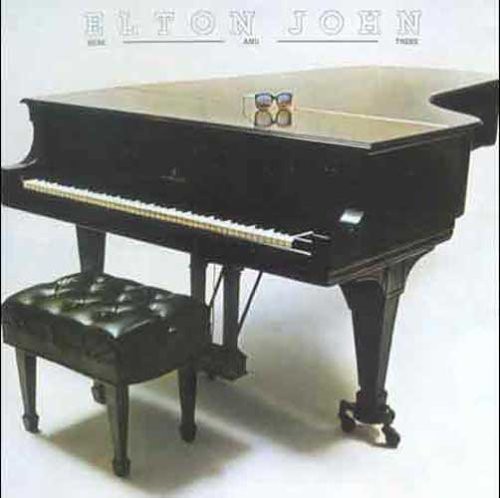 Now a 2 CD/cassette set, this newly compiled and remastered set features 16 bonus tracks including 7 previously unreleased tracks from Elton's 1974 show at the Royal Festival Hall, and 9 previously unreleased tracks from his 1974 show at Madison Square Garden featuring 3 performances with John Lennon ("Whatever Gets You Through the Night," "Lucy in the Sky with Diamonds," "I Saw Her Standing There"), historic as his last public performance. Other live tracks include "Take Me to the Pilot," "Daniel," "Your Song" and more.

''Here and There'' is a live album by British singer/songwriter Elton John, released in 1976 (see 1976 in music). The title refers to the two concerts represented on the album: "Here" is a concert at the Royal Festival Hall in London; "There" is a concert at Madison Square Garden in New York City. The Madison Square Garden show was notable for the guest appearance of John Lennon, in what would be his last public concert performance.

For the 1995 CD reissue, original producer Gus Dudgeon remixed both shows and extended the song list for a two-CD set, almost fully restoring the play lists for both concerts. While "Take Me To The Pilot" and "Your Song" appear on both discs, Dudgeon said in the liner notes that this was intentional, since both versions of each song are very different from each other, and in his opinion merited inclusion. Dudgeon said in a later interview that digital editing software allowed his editing and mastering team to fix a bad note in the London performance of "Your Song," which was otherwise beautiful and helped save a performance that would have otherwise been somewhat marred. He refused to say where in the song the fix was, and cheekily left it up to listeners to find it, if they're able!

This album was also released under the titles ''Here and Now'' and ''London & New York.'' - Wikipedia